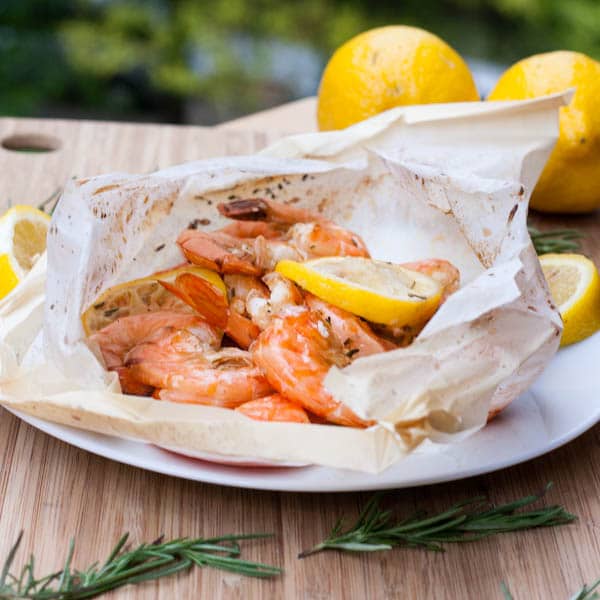 This month’s daring cooks challenge was hosted by Sarah from All Our Fingers in the Pie  and the mandatory component was to prepare a dish ‘en papillote.’

French for ‘in parchment paper,’ en papillote sounds so much more sophisticated though doesn’t it? I am familiar with cooking in aluminum foil, but I have never cooked in parchment. Though the two are similar, parchment is so much more difficult to wrap up/fold over. While aluminum foil you can fold over without fears of it rebelling against you and unraveling, parchment has got a mind of its own.

This New Orleans shrimp en papillote recipe provided came with a step by step visual of how to cut a circle out of the parchment and then crimp the edges ending with a long tip. I was unable to figure out how this works because my parchment continued to unfold itself faster than I could fix it.  I resorted to just folding the sides over each other – essentially creating a rectangular parcel. This didn’t exactly go flawlessly either – with part of the remaining marinade accidentally spilling out of my far from seamless parcel and dripping onto the floor.

I guess I need more practice, but that’s not a problem because I’m happy to make this New Orleans shrimp recipe over and over again!

Aside from the mildly frustrating parcel wrapping experience the overall recipe for the New Orleans shrimp en papillote was a success. In my mind you can’t really go wrong with shrimp to begin with, and the marinade was rich in flavors. I finally got to use some of my Worscestershire sauce too, which really should be sold by the tablespoon considering how rarely I find it in recipes. I bought mine forever ago yet it’s still more than half full. Anyone else here with me? If not please do share your worcestershire sauce heavy recipes!

Naturally D complained that the shrimp needed to be peeled – apparently he doesn’t like to work for his meal. I on the other hand enjoy peeling the cooked New Orleans shrimp, knowing that the added flavors to cooking shrimp en papillote with the shell is well worth the extra effort during the meal.

For more shrimp recipe ideas be sure to check out my shrimp spring rolls ! 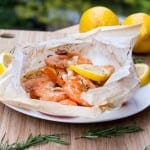 For a dairy free version use vegan butter.