Pumpkin Chia Pudding is packed with fall flavors and spices including cinnamon, nutmeg and maple syrup and makes for the perfect after dinner treat. Naturally sweetened, vegan and gluten free! Perfect FALL dessert! 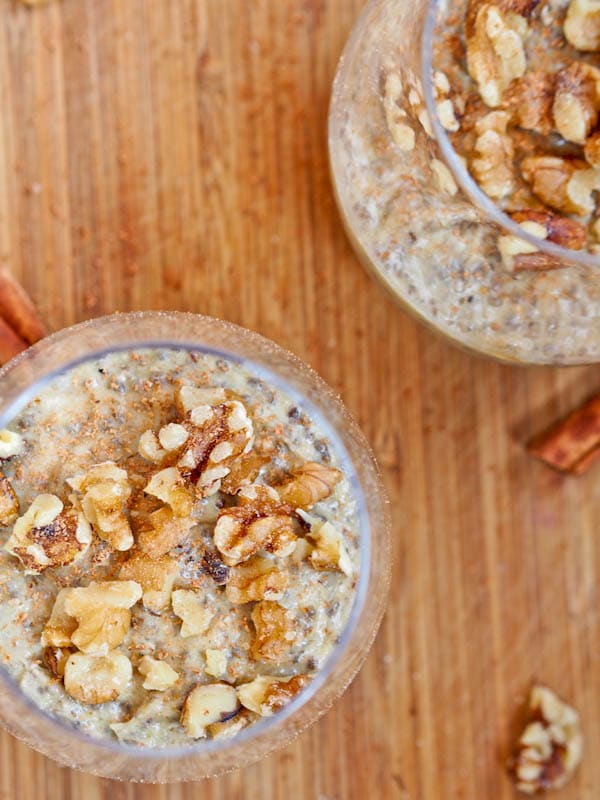 The laggards are those who are pretty much last to finally come around and accept or even test out a product. They’re the people who were still holding on dearly to video casettes, audio cassettes, then cd players, old school nokia phones, disposable cameras, etc. Basically I was just describing myself in a nutshell.

I don’t know why I’m just super change averse. There are risk averse people, but I’m ok with a bit of risk, as long as there’s not a major change involved as well. Even when I know it’s good for me I still will refuse to accept change if there’s an option. You see, after a certain point Blockbuster stopped carrying vhs video tapes so I had to switch to DVDs if I was still to be able to rent movies.

Years ago my friend raved to me both about Pinterest and Instagram. What did I do? Wait an entire year if not more before signing up. I could have been one of those early adopted with a million followers already – instead of my respective 4000 and 121.

And so the chain continue and same old story with the chia pudding bowls phenomenon.

One of my best friends sent me an email back in September of 2013 sharing a chia breakfast recipe saying they were the latest food trend. What did I do?

Wait 13 months before jumping on the chia bandwagon and finally testing out this mysteriously pudding like consistency breakfast bowl.

Even though I start to see more and more chia bowl recipes creeping up in my newsfeed in pinterest and all over foodgawker, I still decided to wait on this for a bit. Just until the time was right.

Which apparently it just so happened to be last week.

Now that it’s October and I’m on a pumpkin craze I knew if I was making a chia bowl it was going to be pumpkin themed, and so this pumpkin chia pudding was born. All you have to do is mix up a bunch of ingredients in the blender, pop these in the fridge and just wait for the consistency to turn to pudding.

These are gluten-free, vegan and refined sugar free, made with figs, dates, coconut milk and pumpkin. So pretty much incredibly good for you while also tasting like pudding. Pumpkin chia pudding can easily be both breakfast and dessert if you ask me. No refined sugars here at all – sweetness just added from dates and figs! How amazing is that?!

I sprinkled some chopped walnuts on top for good measure and they really complemented the pumpkin flavor.

If you’ve never had chia bowls before the consistency can be a bit strange at first, it’s kind of goopy and thick, and you can somewhat taste the little chia pods themselves.

After a few bites, my mind was made up though – I loved it. With the crunch of the walnuts, the creamy pumpkin and cinnamon flavors all came together perfectly and I enjoyed a full bowl full – taking small spoonfuls to make it last even longer.

This pumpkin chia pudding is perfect for breakfast or even as a mid afternoon snack. I’ll let you decide what time of day you want to enjoy this!

Also as a side note if you’re not a fan of the chia consistency you could blend this in the food processor or high powered blender to get this pumpkin chia pudding to be completely smooth. I haven’t tried that yet, but I’m going to next time! 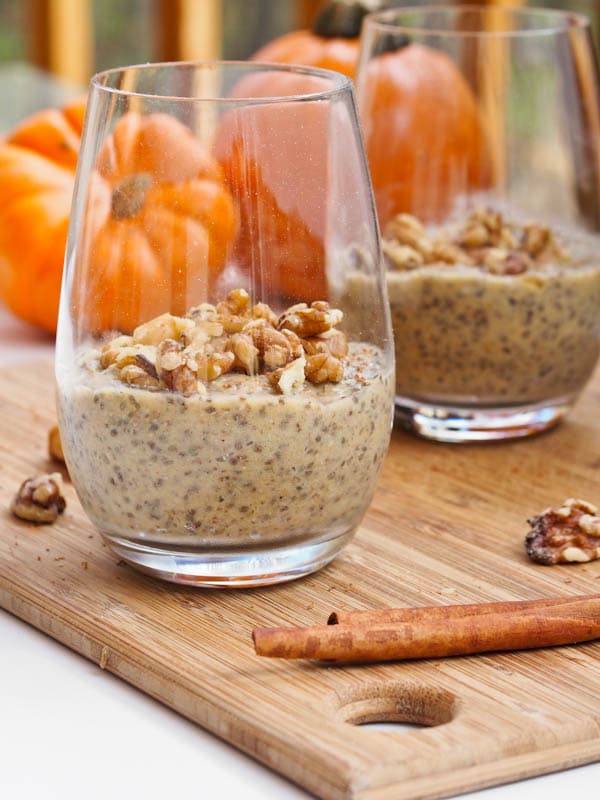 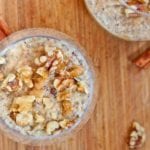 Recipe Adapted from Love and Zest