Shrimp and Chicken Laksa soup- A Malaysian style soup with a creamy coconut milk base and incredible depth of flavors thanks to ginger, fish sauce, lemongrass and other spices. A true favorite. Gluten-Free and Dairy-Free too. 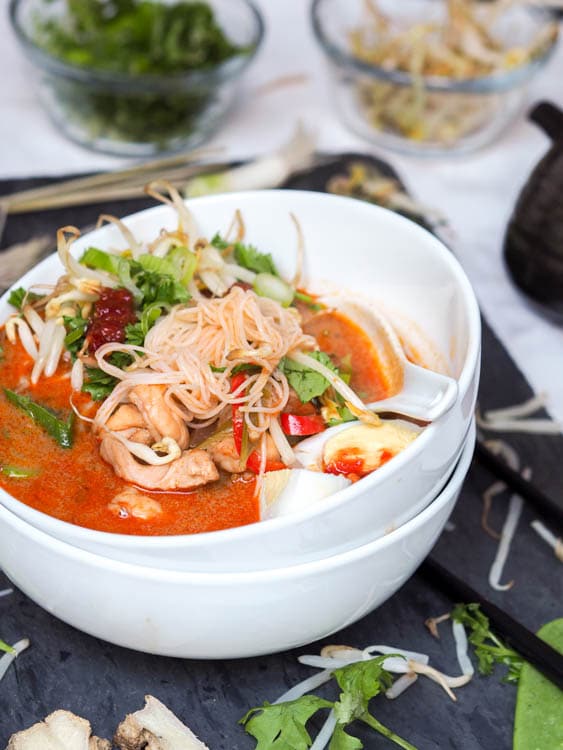 My mom has always raved about the laksa soup that she used to get in Sydney, Australia at a small pub around the corner from her work. The first time I heard her mention it I had never even heard of laksa before, let alone try it.

Nowadays, being a seasoned traveler and having spent over a month in Malaysia I know exactly why she fell in love with laksa soup so many years ago. It’s creamy, dreamy and just oh so full of flavor. The ultimate comfort soup. It’s hands down one of my favorite Asian soups.

Over the years she has requested that I make it for her – naturally not knowing anything about the ingredient list that her laksa consisted of. This made it rather tricky for me, seeing as how there are hundreds of laksa recipes out there and all are slightly different.

The first few times I made laksa soup for her she complained there was something missing. Something not quite like the laksa soup she had in Sydney.

After many (and I mean many) attempts, I think I’ve finally nailed it. 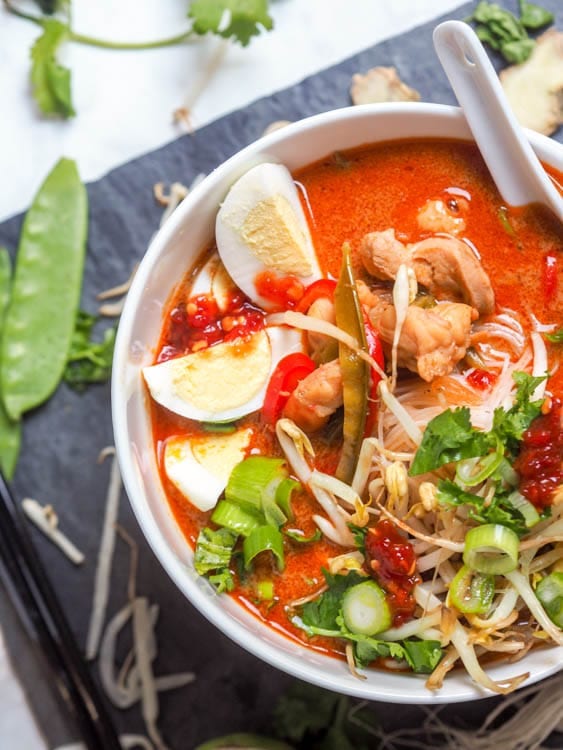 A good laksa starts with a proper laksa paste. Of course if you are willing to put in the work and make your own laksa paste from scratch you will be rewarded in flavor but for time savings and simplicity’s sake I opted to use a laksa paste as my base. This is the best laksa paste I’ve found and you can find it in Asian supermarkets or online. While at that Asian supermarket be sure to pick up the other staples — fresh lemongrass, ginger, fish sauce, bean sprouts – you name all the amazing Asian style ingredients that truly impart a world of scent and flavor into everything.

The smell of this laksa soup alone is so aromatic it is intoxicating. With one whiff you instantly are transported into a world of Asian spices, where the chilies are ground by hand in a mortar and pestle and the curry pastes take hours to make. On my cooking to do list is to make all sorts of Asian from scratch — I really must get on this.

Don’t be intimidated by the lengthy ingredient list in this laksa soup recipe. It might look like a lot, but it will all be worth it in the end. This is the kind of recipe you want to make an enormous batch of so you can eat it as leftovers for days or share it with everyone you know at a dinner party. 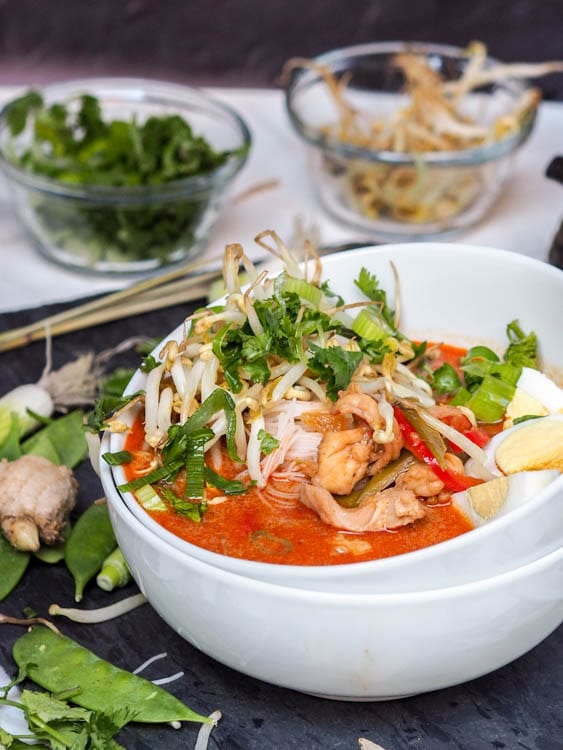 I have made this laksa soup recipe for multiple dinner parties and it is always a hit – the super creamy and fragrant broth blends perfectly with the soft noodles, meaty chicken + shrimp and then the fresh cilantro, lime juice and bean sprouts just elevate this to the next level.

I love to serve my laksa soup with boiled eggs too, I just love the taste when the cooked egg yolk mixes with the broth – this part is optional though – feel free to omit this if you prefer.

If you know me well you know I love all soup recipes but this laksa soup is hands down one of my favorites. While not quite a traditional recipes – as always I’ve taken a few liberties – I truly believe you are going to love my version and spin on the classic Malaysian laksa soup. 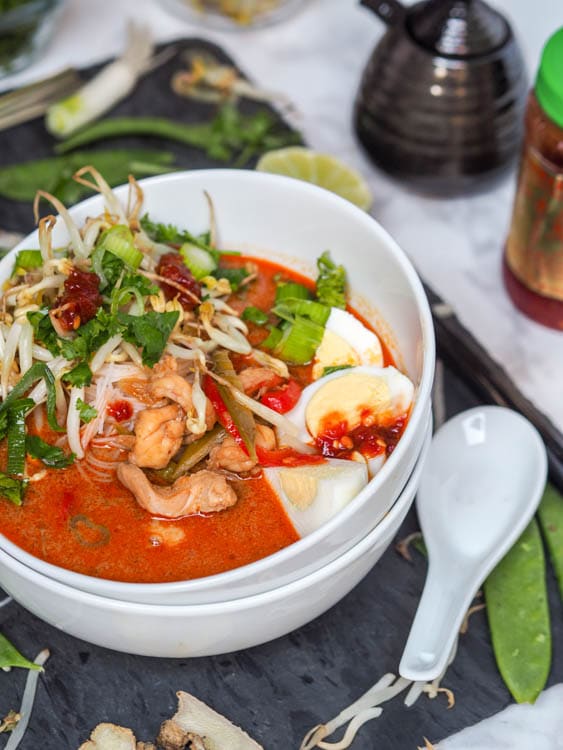 For some of my other favorite soup recipes be sure to check out: 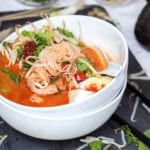