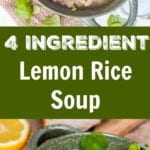 Lemon rice soup comes together in less than 30 minutes and only requires 4 ingredients + a secret ingredient to make a super flavorful quick home made broth. A healthy gluten-free and dairy-free lunch doesn’t get easier than this. 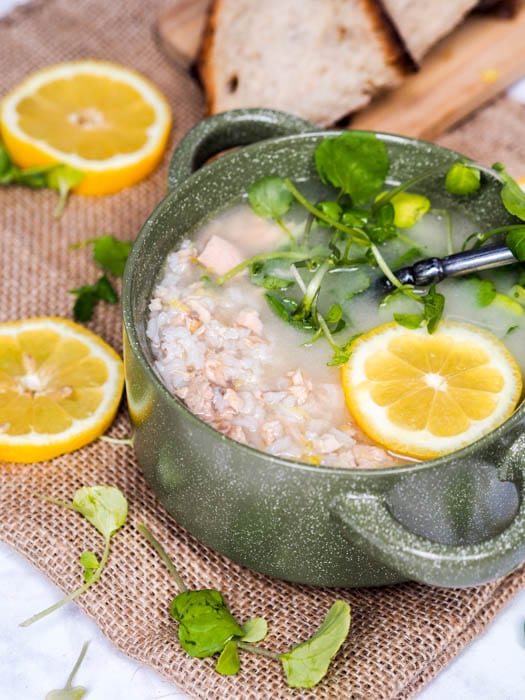 Lemon rice soup is frequently accompanied by chicken and traditionally hails from Greece. And while I have nothing against Greece nor chicken lemon rice soup, I felt like the classic was well covered on the world wide web. I wanted to throw a new ingredient into the mix.

Canned salmon to be exact – which when added to soups becomes super flaky and soft, creating the perfect texture and easy protein boost. The watercress was added last minute because the soup needed some crunchy greens.

Watercress is one of my favorite greens to add to soup because it’s both light, fluffy and hearty at the same time. It’s bouncy and soft, with quite a gentle flavor and ever so slight crisp stems. No need to cook the watercress in the soup – just add it as a garnish. If you have some halibut on hand I also highly recommend you get around to making my halibut watercress soup.

This lemon rice soup also has a secret ingredient that makes for an easy super flavorful broth.

That secret ingredient is shrimp shells. Not shrimp, just the shells. Whenever I purchase shrimp I always save the shells (when removed off of the raw shrimp) and freeze them in ziplock bags. Those shells are then used to create a super flavorful seafood infused broth. You essentially just boil the shrimp shells in a pot full of water for 10 to 15 minutes. That’s it. Home made seafood broth is ready for all the other ingredients.

Once you remove the shrimp shells you add the rice to the pot. Cook until the rice is cooked through and then add the canned salmon, lemon juice and lemon zest.

When serving add in a handful of watercress and that’s it. Lemon rice soup for lunch!

After spending 2 months traveling around Italy and Greece this summer I’ve started thinking a lot about Mediterranean flavors and cooking versus American or Asian cooking styles.

My take-away? Simplicity. Mediterranean cooking is all about simplicity. There aren’t dozens of ingredients in the recipes; just a few simple ones. The ingredient count is low but the quality of each ingredient is super high. That’s why a most basic Italian pasta can leave you completely surprised and impressed because everything from freshly made pasta to high quality fragrant olive oil and the ripest plumpest heirloom tomatoes are the best in their category.

Asian cooking on the other hand is all about a marriage of flavors created with a tiny quantity of a dozen different ingredients. The complexity of flavors is created by adding both sweet and savory elements to create a fusion of the two (even if you might think you’re canceling out your fish sauce with the addition of sugar – you in fact, are not).

A lot of my recipes on this blog tend to have lengthy ingredient lists because this is a way of cooking I have grown accustomed to, but I would also love to show you that simplicity also makes for excellent meals.

As long as you focus and hone in on buying high quality ingredients even the simplest sounding recipes can be truly exceptional.

So while this lemon rice soup strays from the traditional Greek chicken lemon rice soup, I was essentially inspired to make this recipe with the Greek Mediterranean simplified style of cooking in mind. 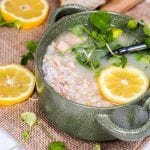