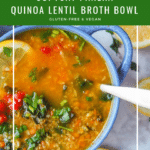 Panera broth bowl with lentils, quinoa, kale and cauliflower makes for the most comforting and nutritious one pot meal. Gluten Free and can be made Vegan. A Healthy superfood copycat meal! 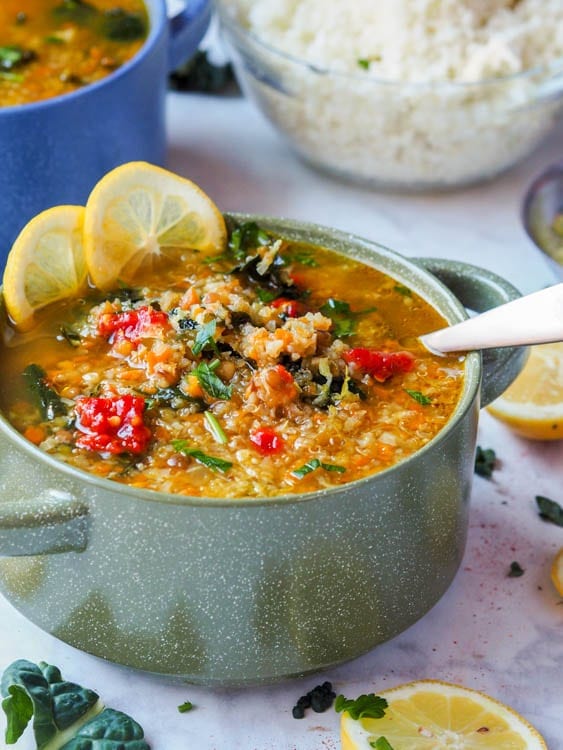 Some days we would get it twice, once for lunch and then again for dinner.

Good thing Panera now has a drive through so you can literally hop into the car in your pajamas (as we did) and get your Panera broth bowl without even having to leave the comfort of your own car.

But Panera seems to always be experimenting with their broth bowls. They seem to be switching things around all the time, adding new broth bowls to the menu and removing old favorites. 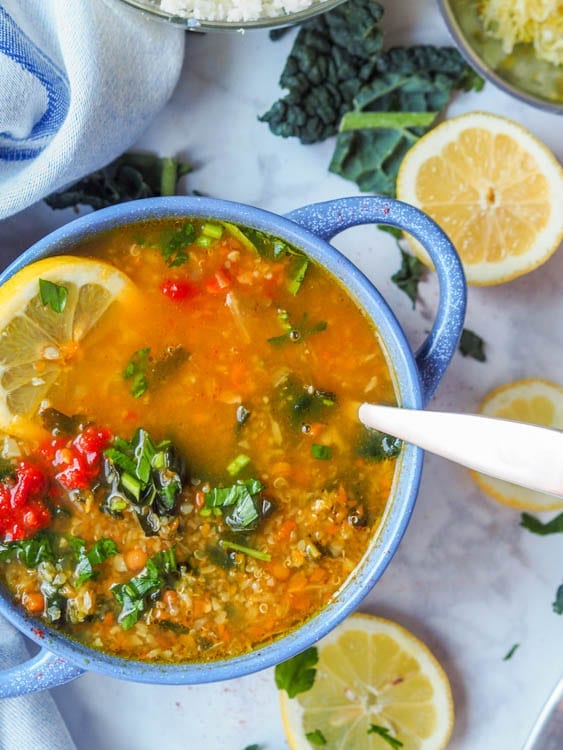 Now this could have been a serious catastrophe but let’s think of this as a blessing in disguise, because now I can make my own copycat Panera broth bowl at home.

And I get to eat it in my pajamas with my best pal as well. And I get to save gas and time spent in the car.

I do have to put in the legwork to create the Panera broth bowl myself, but that does make it so much more rewarding in the end. 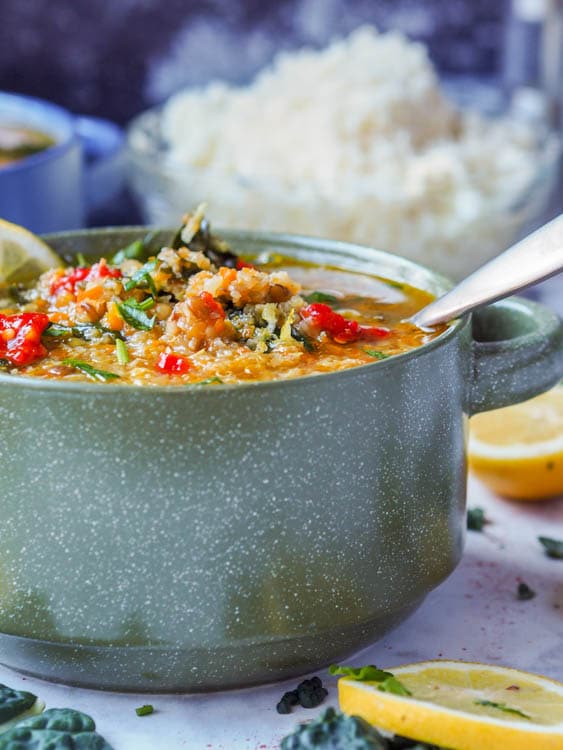 And I get to experiment with the recipe adding in more or less of the ingredients that I think need adjusting. I love getting my recipe inspiration from restaurants or food establishments and then going wild in my own kitchen and putting my own spin on things.

While the classic Quinoa and Lentil Panera broth bowl was delicious, I pronounce my recipe even better (and more nutritious). I have taken liberties and added in 1/2 head of cauliflower (riced) for extra nutritional content and texture, while omitting the tomatoes for a less tomato flavored broth, turned the recipe vegan by omitting the chicken, and added in Asian chili garlic sauce as a spicy garnish. 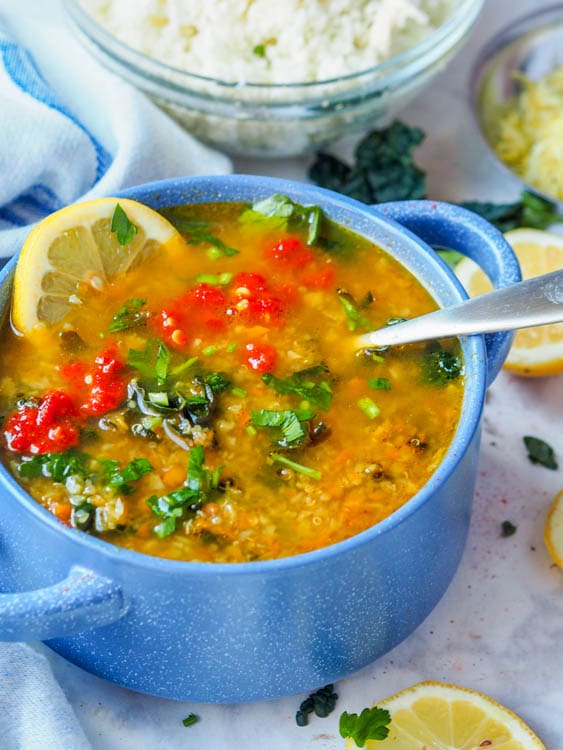 Wow, I mean WOW! I hate to brag but this might just be the best soup/stew/broth bowl concoction I have ever created. It is simply amazing. I love the combination and texture of both quinoa and lentils in one dish — something I have never done before.

The broth itself is packed full of flavor from a home made broth, the tamari, lemon juice and vegetable puree. The veggie puree which is sauteed in oil creates an awesome base from the broth bowl to go off of. Then there’s all the leafy greens – kale + spinach in large quantities. I mean this is pretty much health in a bowl.

That is SO delicious and comforting and amazing and fill in all your favorite foodie adjectives right here.

I make an enormous pot of this copycat Panera broth bowl and then eat it for lunch and dinner for days. Who needs variety when you have meals like this?

Honestly regardless of if you’ve had the Panera broth bowl before and were a huge fan or not, I know you’re going to love my copycat version of this soup!

For a vegan version be sure to use a vegetable broth (though chicken broth works too for a non vegan version — home made is always best)! For a more tomato flavored broth when pureeing the veggies in the beginning add in 1-2 chopped tomatoes. I have tried the recipe both with and without tomatoes and love it both ways.

This Panera broth bowl with quinoa, lentils, cauliflower and kale does require a fair bit of prep work, but you can make an enormous pot of this and have this as a hearty full meal for days!

For more vegan recipe ideas check out my 25 favorite vegan & gluten free recipes. This soup can be a full meal or a starter if served with patatas bravas, or fettucine alfredo. 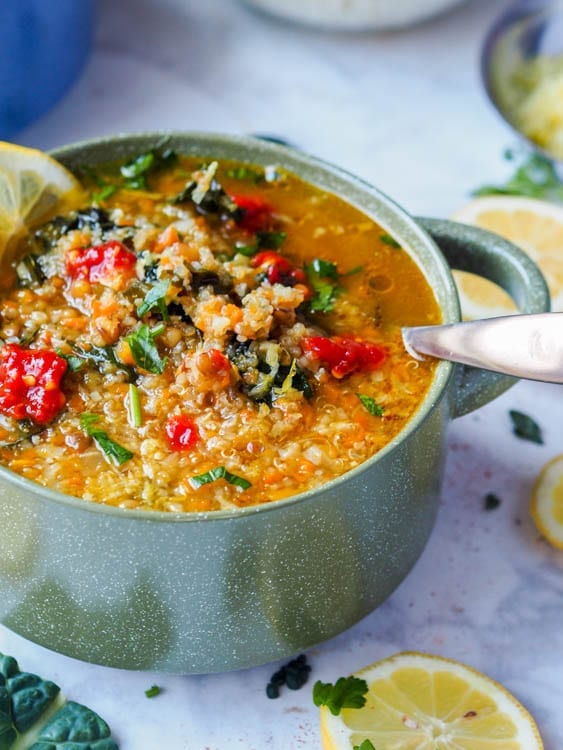 How to make panera broth bowl 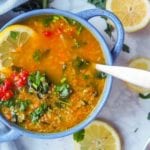 *** For a more tomato flavored broth to the vegetable mixture that is being processed and pureed in step 1 add 1-2 chopped tomatoes.