Quinoa veggie salad  with lemon pesto sauce makes for an easy 30 minute plant based meal. Dinner doesn’t get easier than this! 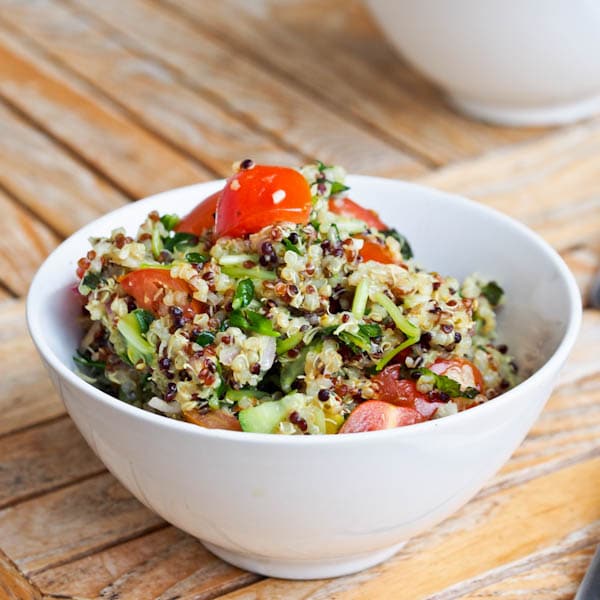 Just the other day I committed the ultimate travel faux pas. I took us to the wrong airport and then we missed our flight.

Well to be fair it was the right airport, just a different terminal that happened to be 22 km away, and we didn’t quite “miss” the flight, we got there 35 minutes before the flight but were no longer allowed to check in.

And so instead of getting in to Penang, where we’re renting an apartment for a month and half at 3:30pm we didn’t get in until just past 10, after a series of buses, metro rides and cabs.

Oh and all the wasted money. 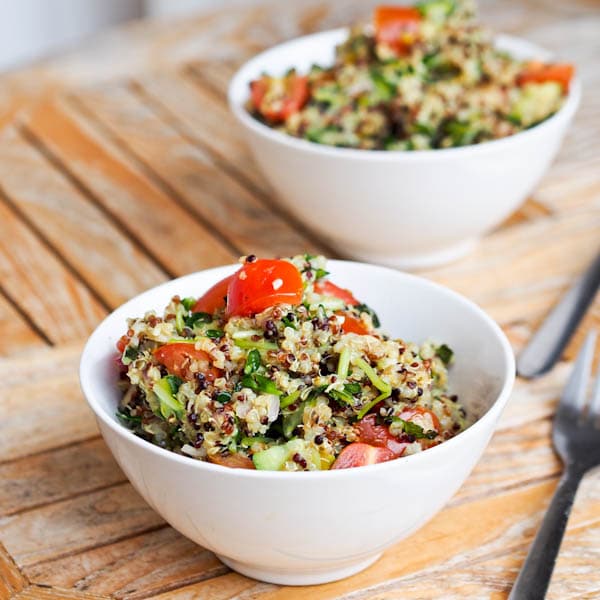 It’s going to take me a while to get over that one.

So to make myself feel better, what did I do?

Make quinoa.  More accurately I made this quinoa veggie salad to make myself feel better. That always helps, right? Food is the medicine? I say so, even if I created a mess for us myself, I still felt terrible about it!

My mom brought me a bag of quinoa to Australia since I had been living quinoa free for months as I couldn’t find any in India, Nepal or Thailand and I’ve been carrying that bag around with me since mid-January. It was time to break it out for an uplifting meal aka this quinoa veggie salad recipe.

So I tossed that together with some veggies (tomatoes, cucumbers, onions, mint, scallions, pea sprouts) and drizzled it with a lemon and pesto concoction. One of my new favorite plant based meals; this quinoa veggie salad comes together in under 30 minutes and is bursting with fresh flavors.

Let’s talk sprouts for a minute. I personally love all sorts of sprouts – alfalfa might be my favorite, but I’m also down with broccoli sprouts, pea sprouts, you name it. In this quinoa veggie salad I opted to use pea sprouts as they are a bit more heartier and firmer than alfalfa sprouts, and they add this crunchy pleasing green veggie into the mix. As for herbs, you could add all your favorites to this quinoa veggie salad like basil, cilantro, etc, but I only had mint on hand so that’s what I went with. Mint is the best herb in my opinion, it adds just a refreshing kick into any dish and just bring a salad to life immediately!

This quinoa veggie salad is perfect for a simple meal. Let me know what you think of this recipe in the comments below! 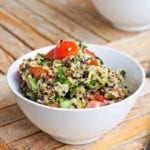