This Quinoa Artichoke Salad with Sundried Tomatoes & Chicken has it all. Every distinct flavor of the ingredients are just deliciously appetizing! Also, it is gluten-free.

We just spent two weeks in Poland and it’s an interesting place. Underrated and overlooked.

Not sure I knew what to expect from Poland before we got there but it certainly wasn’t charming towns, which lo and behold the country is actually full of.

Yes, many places were almost completely destroyed in World War II, but to their defense they did a spectacular job rebuilding the cities and old towns to look as they did before.

The country has good food, variety of beers, cities, beaches, natural sites, and better yet  it is significantly cheaper than Western Europe.

One thing Poland does not have though?

I looked everywhere and did not find a single trace of quinoa in any of the stores. Guess it hasn’t made it’s way over there yet.

So as soon as we crossed the border into Germany I started my quinoa search there and luckily as I was walking past a health food shop, something told me to turn around and go in.

And there it was on the lower shelf, my beloved quinoa.

So I hope you’re ready for a slew of quinoa recipes.

This one’s a good one though – quinoa artichoke salad with sundried tomatoes, chicken and feta, the whole gang’s here.

I shouldn’t have to convince you.

This  quinoa artichoke salad with sundried tomatoes is Just Yum. 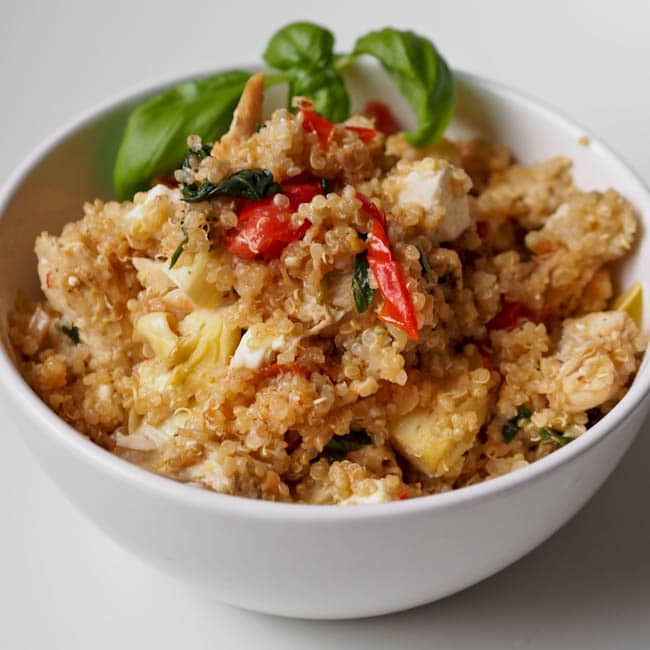 Let me know what you think of this quinoa artichoke salad in the comments below! ANd if you love quinoa be sure to check out my quinoa chicken salad recipe too!

Quinoa Artichoke Salad with Chicken and Sundried Tomatoes makes for an easy weeknight dinner on the table in no time!

To make this recipe dairy free, omit the feta