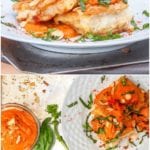 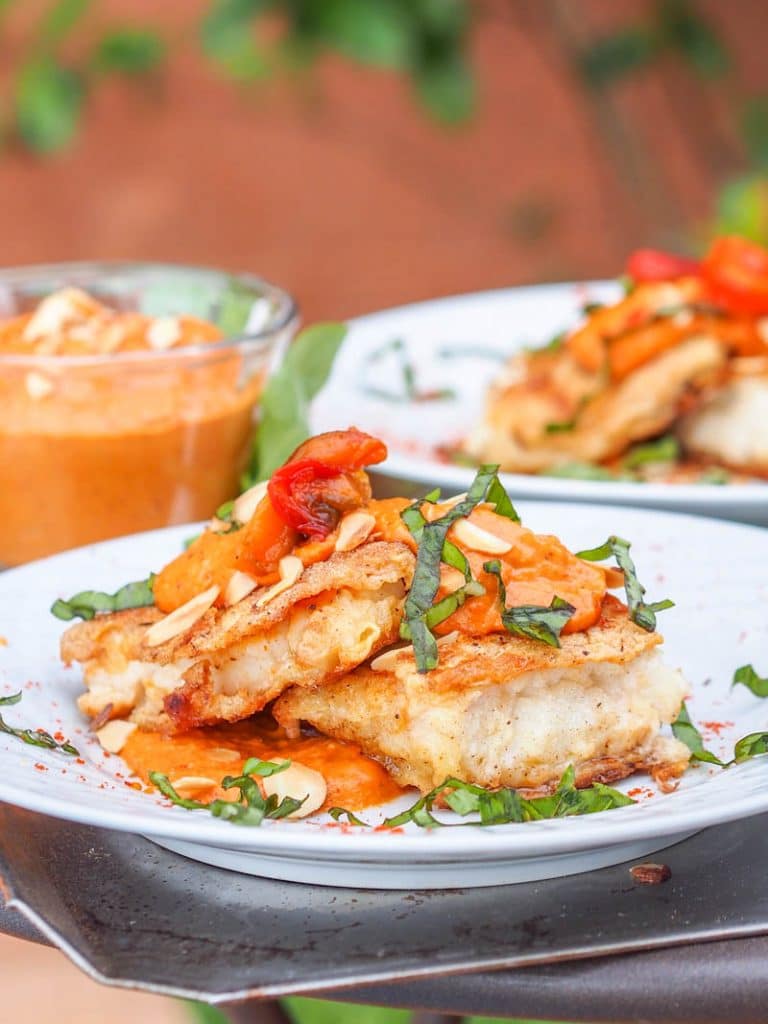 This pan seared snapper recipe with this sauce came about because I have become obsessed with romesco sauce lately.

Romesco sauce might just be the best sauce ever. Sorry pesto, move over (ok you know I still love ya – seriously though if you haven’t made my vegan basil pesto yet, we can’t be friends).

But honestly romesco sauce might just be the new hot shot in town. This sauce is a combo of roasted red peppers, toasted almonds, red wine vinegar, olive oil and a little bit of tahini and smoked paprika if you’re feeling adventurous (I know I am).

And when you’re getting real savvy in the kitchen you’ll be roasting your own red peppers – ok kind of an afternoon project, but definitely a rewarding one.

I randomly decided to first roast a whole tray of 12 red peppers while house sitting in Costa Rica. I mean why not preheat the oven to 400 degrees F when it’s already almost 200 degrees outside right? I mean sometimes I have the best ideas. Or not. Air conditioning in the house or not, I had a sudden impulse to roast red peppers, and nothing was going to stop me.

Once they’re roasted, sweated, peeled and de-seeded you are ready to make the sauce.

Throw everything into the food processor while the fish fillets are cooking and that’s it.

This fried red snapper recipe was literally one of my most impressive dinners in months. Think super tender lightly breaded and crispy pan fried fresh fish topped with a smoky and rich roasted red pepper based sauce. Snapper recipes for the win and date night success.

Top with toasted sliced almonds, slivered basil and thinly sliced roasted red peppers. This pan seared Snapper recipe is a weeknight dinner finer than what you would purchase at a restaurant. The exact words D told me when I served this to him.

Why I love this pan seared snapped recipe:

How to make my pan seared snapper recipe:

Season the fish fillets with salt and pepper to taste and dip into a beaten egg.

You just want a thin coating of the egg on both sides of the fish. Then dip into the panko breadcrumb mixture. Push the fish down into the breadcrumbs to make sure they really stick to the snapper fish.

Heat pan (preferably a cast iron skillet) over medium-high heat and add the oil. Once the oil is hot add the snapper fillets to the skillet. Sear on each side for a few minutes until cooked through. Fish will flake easily when cooked and the internal temperature will be 145 degrees F.

To make the romesco sauce in a food processor combine roasted red peppers (home made or from a jar), almonds, red wine vinegar, olive oil and salt. To add more flavor to the romesco add smoked paprika which will give it a bit of a smoky kick, and tahini to make the sauce a bit more rich and creamy.

Serve snapper fish drizzled with sauce and sprinkled with almonds. 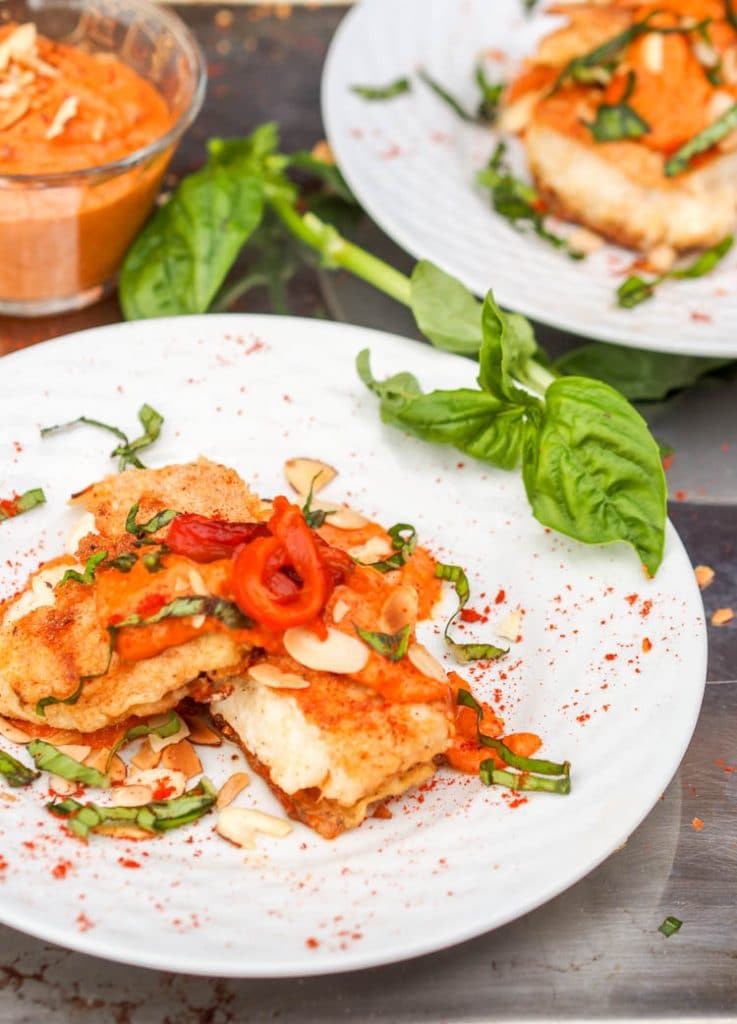 If you’re looking for other fish recipes be sure to check out my:

Do you have a favorite snapper recipe? Please share in the comments below. Stay tuned for more red snapper fish recipes in the coming months! 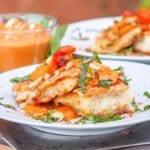 This pan seared snapper recipe with romesco sauce is an 8 ingredient dinner that will be sure to blow your tastebuds away. Soft battered pan fried fish topped with a smoky and nutty roasted red pepper and almond sauce.