Your new go to healthy pasta recipe favorite: Vegan Fettuccine Alfredo with caramelized butternut squash and red onions, sprinkled with fresh rosemary. You’ll be dreaming about this dish. Who even know a vegan and gluten free creamy pasta was possible? 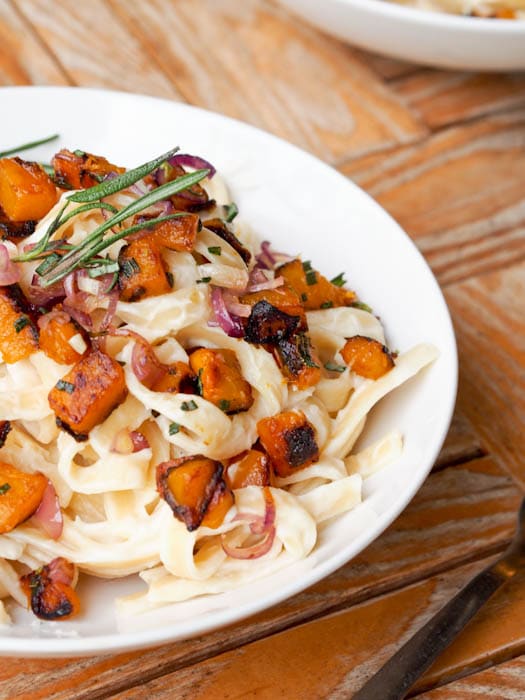 Get My Weekly Meal Plan Plus My FREE GF/DF Avocado Recipes Ebook.

I’m sitting at the airport Mcdonald’s sipping my first real coffee in 45 days.

You know you’ve been drinking too much decaf instant coffee when a McDonald’s cappuccino starts to taste deluxe. The fact that it’s served in a real glass mug and not one of those Styrofoam monstrosities only adds to the deception.

Why have I been depriving myself of real coffee you ask?

When we first got to Malaysia, D and I were going to try a polyphasic sleep schedule — basically this crazy idea that you can re-train your body to adhere to a reduced sleep schedule while feeling more alert and energized. There are a variety of different types but we were going to try the one where we would sleep for 6 hours at night and then take a 30 minute nap in the afternoon.

You’re not supposed to have caffeine while doing this though, since it disrupts your natural body clock, so I grabbed a jar of decaf at the store, so I could at least mentally pretend I was still starting my days with a coffee.

Oh and then after all that I didn’t even go through with the sleep trial. D decided to test it out himself for a week, but then he threw in the towel so I didn’t even bother.

And that’s how I got stuck with a whole jar of decaf to drink with no longer even a good reason for doing so.

But now that we’re at the airport that McCafe started to just look so alluring and I had to indulge.

Let’s hope it only gets better from here. We’re heading to Spain where I plan to fully splurge on a rich real coffee daily. After that we head to Italy, and we all know the Italians are masters of the coffee culture.

So here’s to 45 days of awesome coffee.

And since we’re talking about culinary improvements I might have just come up with the ultimate pasta recipe aka this vegan fettuccine alfredo. 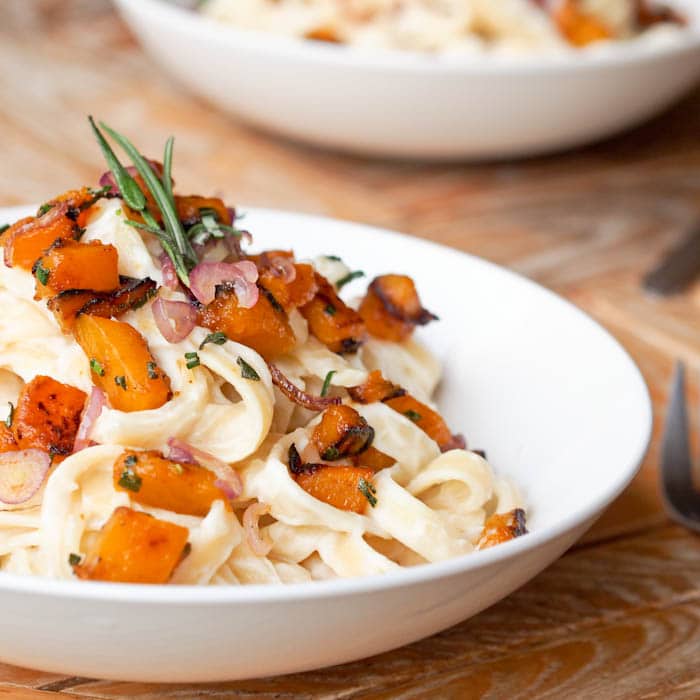 I don’t mean to brag but this vegan fettuccine alfredo with caramelized squash and red onions was out of this world.

I slightly adjusted Lindsay’s cauliflower sauce make the pasta a vegan fettuccine alfredo sauce and then pan fried cubed squash and onions. Pair that with some freshly diced rosemary and thinly sliced garlic chips and you’ll be in the seventh step of pasta enlightenment.

The silky sauce gets absorbed by the noodles and the caramelized toppings with the rosemary add a whole new flavor profile.  I love rosemary and squash together – those two were made for each other. Garlic chips are simply my favorite and really should just be added to everything.  So there you have it. The best vegan pasta sauce ever – aka this vegan fettuccine alfredo.

I never would have guessed you could even make a vegan alfredo sauce, but alas, with the help of cauliflower it not only is possible but is healthy and delicious as well.

I’m going to be doing a lot more experimenting with vegan pasta sauce in the future so stay tuned but for now, make this the next time you’re craving pasta.

Let me know what you think of my vegan fettuccine alfredo in the comments below! 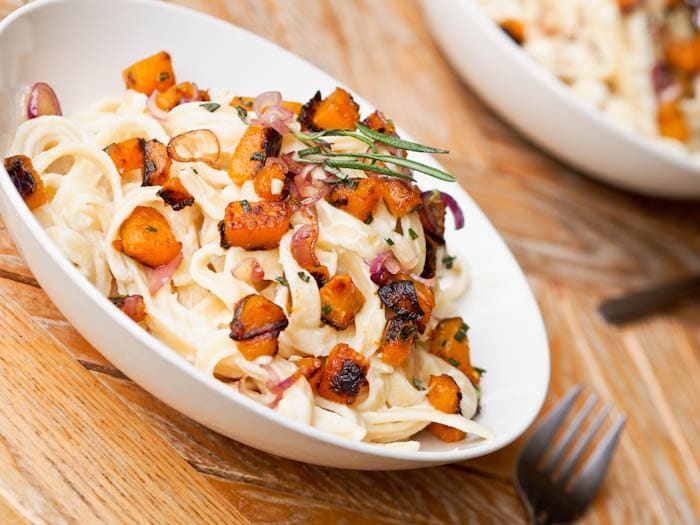 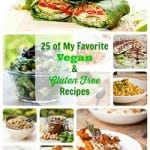 Exclusive Bonus: Download 25 of my all time favorite vegan and gluten free recipes. 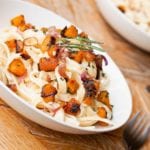 Your new go to healthy pasta favorite: A vegan fettuccine alfredo with caramelized butternut squash and red onions. You'll be dreaming about this dish.