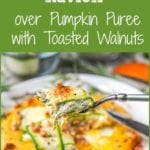 Your favorite fall pumpkin rosemary flavors topped with a vegan ricotta stuffed zucchini ravioli and sprinkled with toasted walnuts. Dinner doesn’t get better than this. Who knew it’d be so easy to make zucchini ravioli paleo, low carb and gluten free? 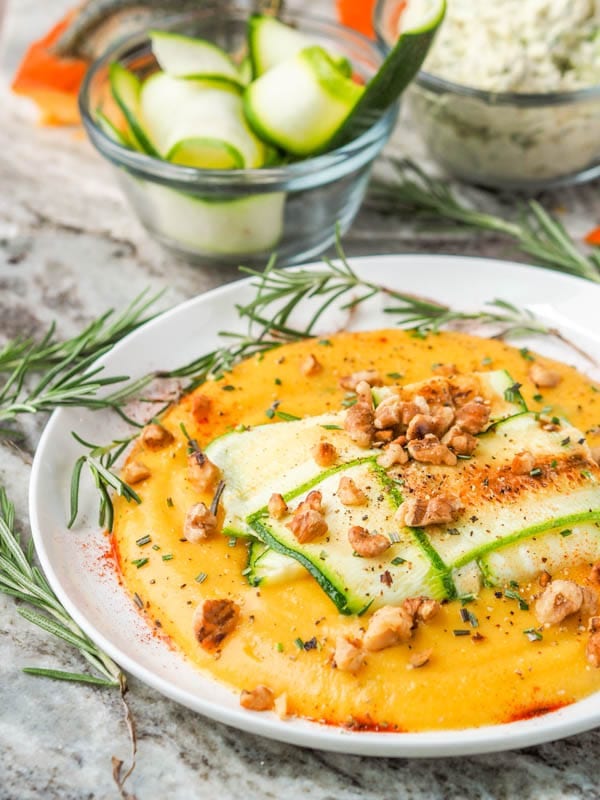 Zucchini ravioli paleo, gluten-free and dairy-free too! I hate to brag but this zucchini ravioli over pumpkin puree is hands down my new favorite recipe. You’re going to love this. This is pretty much fall in a nutshell.

But healthy. And vegan. And low carb. And gluten-free. And paleo. And all things wonderful and fall themed.

Are you as excited as I am?

Lots of pumpkin recipes. But these zucchini ravioli are not just one more. This is a recipe unlike any other.

The base of this zucchini ravioli paleo recipe – the pumpkin puree is soft and fluffy – imagine taking a bite out a cloud, but one with a rich and familiar pumpkin flavor.

And with that cloud you’re also taking a bite of little magical parcels stuffed with whipped herbed vegan ricotta that you would never know isn’t the real thing.

And then some sprigs of rosemary are mixed in too, with a toasted crunchy walnut finishing off the bite.

Are you in foodie heaven with me? I’m drooling just thinking about these.

The zucchini and the mandolin currently go hand in hand in my mind.

And since I’d already discovered that thin slices of zucchini + vegan herbed cashew ricotta were a good fit – it was only natural that I re purpose those two into vegan ricotta stuffed zucchini ravioli. 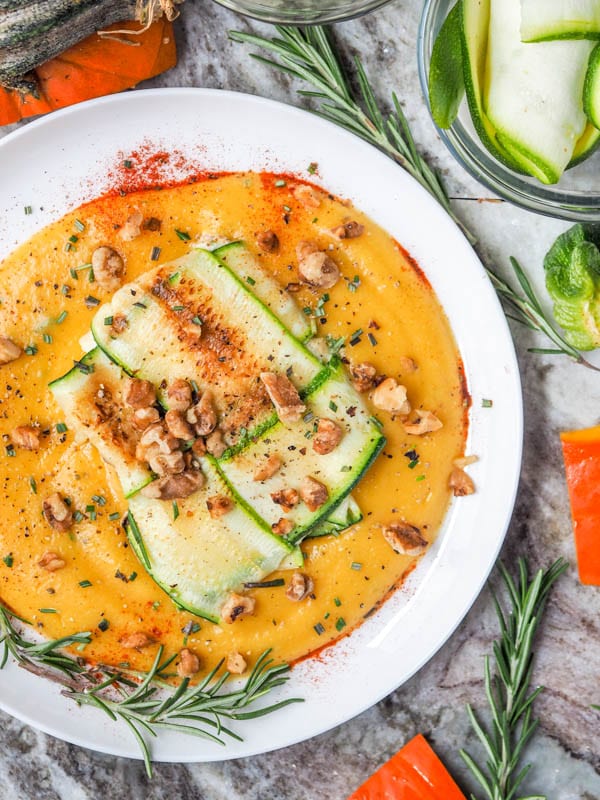 Now that part is a little tricky. Once the zucchini is thinly sliced and salted (to let some of that zucchini sweat come out), then you’ve got to lattice (is that the word?) 4 slices of zucchini together, over, under, over, under. You basically want the four slices locked in, so that they become one large zucchini striped rectangular shape.

Are you with me? This all makes perfect sense once you have the zucchini in front of you.

Add a hearty dollop of the herbed ricotta to the center and start sealing the zucchini ravioli, folding in one zucchini strip at a time.

You could actually serve these raw, and as is, but I wanted to get a light sear on them in a bit olive oil, but this part is entirely optional. 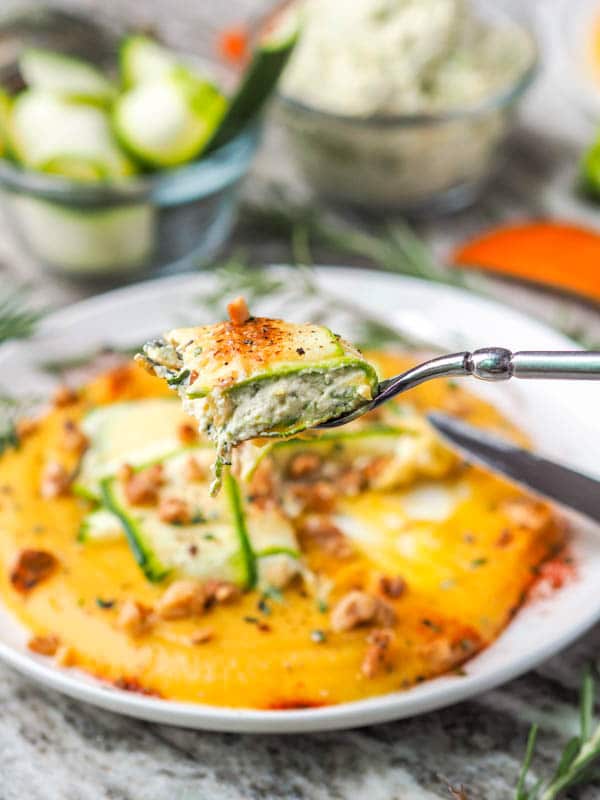 Now if you are making the whole zucchini ravioli paleo recipe from scratch in one go, I recommend thinly slicing the zucchini and salting it to let it sweat before boiling the cubed pumpkin, that way once the vegan herbed ricotta is ready, you can pop that in the fridge to solidify a bit, while pureeing the pumpkin with the coconut milk and rosemary in the food processor.

You know how when you make something in the food processor you can never get it fully out of there? There’s always some delicious spoonful of sauce stuck in there, and it’s always a damn shame to have to just soak the food processor and let it go to waste.

Not the case here – not a drop of vegan herbed ricotta is wasted, because you just add the pumpkin right in there with whatever is left.

Am I resourceful or what?

Once the sauce is ready, set it aside and start making the pumpkin ravioli. Once you light sear that, you can serve that over the pumpkin sauce, topped with fresh chopped rosemary and crushed toasted walnuts.

One forkful of this and you’ll be lifted straight into foodie heaven. All your favorite fall flavors highlighted with super light and airy zucchini ravioli stuffed with herbed cashew ricotta.

Next time you want to impress your dinner guests/husband/partner/friend/fill in the blank — make this for them. Trust me on that. 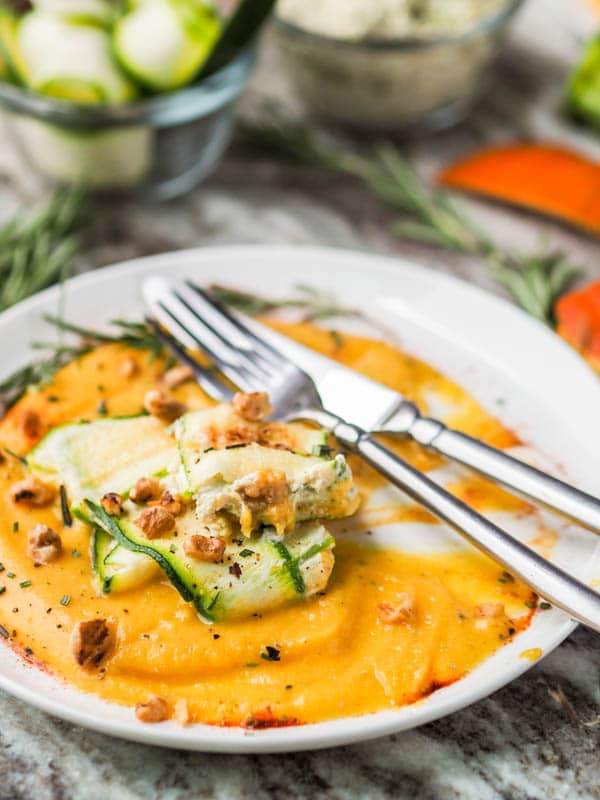 For the zucchini lovers check out my Vegan Recipe with Zucchini and Squash Gratin and Vegan Zoodle Recipes Round Up! For this zucchini ravioli you will first need to make my Vegan Cream Cheese (which would also be perfect in a vegan version of my Spinach Cannelloni with Ricotta Filling, or on top of my Polenta with Roasted Vegetables instead of Feta). 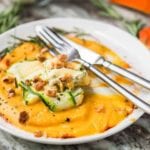