This vibrant, healthy and nutritious rainbow colored Mexican themed vegan sweet potato quinoa salad with black beans is perfect to celebrate Cinco de Mayo or just about any day of the year. Filled with fresh herbs and a zesty lime based dressing. Gluten-Free too. 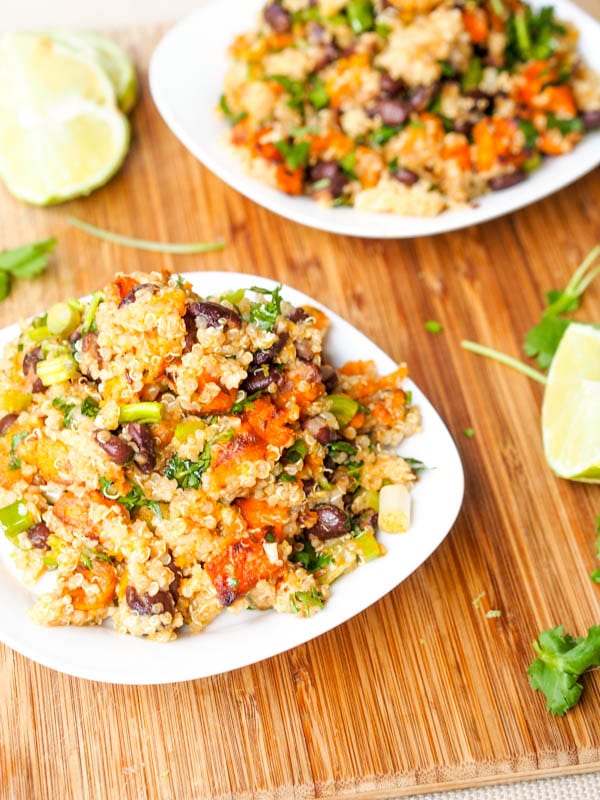 While everyone has been gearing up for Cinco de Mayo the past week, I was getting ready for something else instead.

The beginning of boating season.

While that used to mean nothing to me, my dad and uncle recently (last fall) purchased a sailboat and May 1st was meant to be launch date.

The original plan was for a crew of 4 (my dad, uncle, cousin, and dad’s friend up from Moscow for his 50th bday celebration) to sail the boat from the Cape to the marina where it would be docked in Connecticut. The 100 mile voyage was meant to take 3 days.

It was a crazy plan, considering only one person (my uncle) was properly experienced in sailing. And the fact that the boat when purchased was simply a carcass of a boat and need to have everything fixed or purchased. This would have been an insane voyage.

Thankfully they called it off just days before launch. A new plan was hatched. To tow the boat to the marina and then just have a leisurely day at sea testing things out. A more reasonable approach.

Not without it’s own set of obstacles of course. The original tow man was all booked up, the marina couldn’t rig the mast because they were all booked. Luckily I came in to save the day with my refusal to accept our sailing weekend would be ruined.

I instantly called pretty mush every marina in Connecticut and am now thoroughly well versed in boating lingo (as one of the fellows told me it was going to be a real steep learning curve). After 10 calls I found a different marina that would rig the mast for us. Winning!

New plan, May 1st, rig the mast and motor through the water to our proper marina before my uncle our captain arrived to set up the sails.

Once the rigging started, it was quickly discovered that the mast was straight up broken. As in broken, and there will be no boating on May 1. Cue crushed dreams and being exhausting from waking up at 6am for nothing.

Aaaah more obstacles to overcome. New plan was quickly hatched – we would sail on Saturday May 2nd with nothing to stop us.

And that we did. It started off fairly smooth. Well with a delayed start and with D, myself and my cousin strapped to a buoy and failing about in the water for 2 hours on the boat while we waited for the rest of our crew to arrive, at which point I was thoroughly  entrenched in a minor bout of motion sickness. Finally we were good to go.

The sails were up and it was a perfect sunny day. It was all starting to come together. 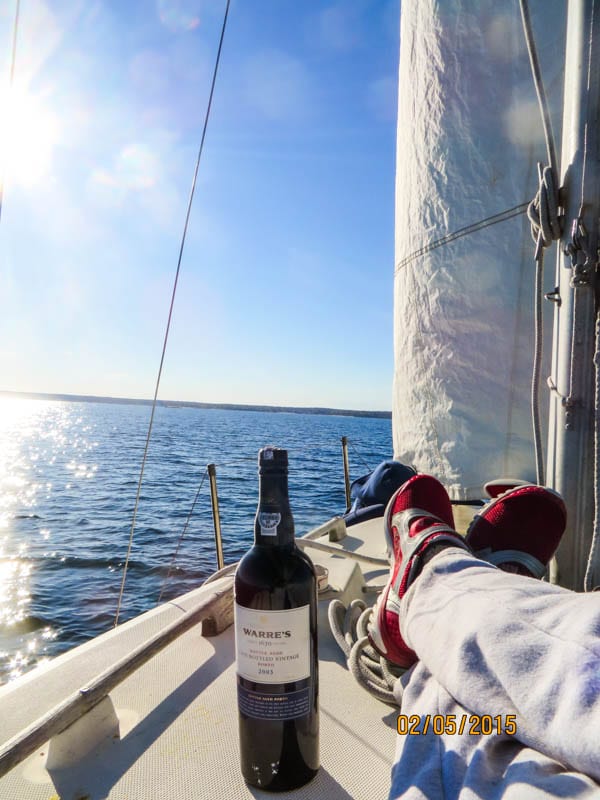 A quick boarding by the coast guard ended with having the boat searched and a ticket written out for only having one fire extinguisher.

At least we had life jackets for every person on board.

From there it was going to be a short ride into the marina. We pulled the sails down and crossed through one open bridge, with another bridge looming close before us.

I was starting to get nervous. The second bridge was not open and by my calculations our mast was in no way going to clear that bridge. As we motored closer to it, I continued to verbalize my concern, going into loop mode repeating over and over again the we were going to make it.

You can see the full video footage right here — luckily I had a handy gopro right in my hand to film the whole thing.

I’ll save you the suspense though. After seven repeated warnings and distressed calls that we weren’t going to make it, we did actually hit the damn bridge. As the whole sailboat was knocked onto one side, I’m amazed nobody fell into the water. Then we were stuff, under the metallic rails of the bridge.

Luckily the Coast Guard stayed close behind and was able to give the boat a bit of a nudge — enough to full scrap the mast on the top of the bridge and somehow get us out of there.

A close call. With everyone safe and sound and mostly speechless we continued on – hoping to finally make it to the marina and off the boat.

Literally within a few minutes we hit some shallow water and managed to get the boat stuck. Seriously?

At this point the Coast Guard pulled up to us, for the third time now and simple told us to park the boat at the nearby dock and dismembark. While we tried to persuade them we were good to go, they simply told us what was going to happen right now – we were to park and get off the boat.

From there the department of transportation and the police were called to check and see if there was any damage to the bridge and to generally question us about our states of mind.

Luckily they let us go after and hour and with a slow and easy go of it we did finally make it into the marina — with the Coast Guard always close behind us at that point. I’m pretty sure at that point they were just waiting for us to set fire to the boat, with only our one fire extinguisher on hand.

Needless to say it was an adventure of a day. One that needed several shots of whiskey at the end to try to calm those nerves a bit.

So, as I said, while everyone was preparing boatloads (ha get it) of Cinco de Mayo recipes in time for today, I was dealing with boating things all weekend. 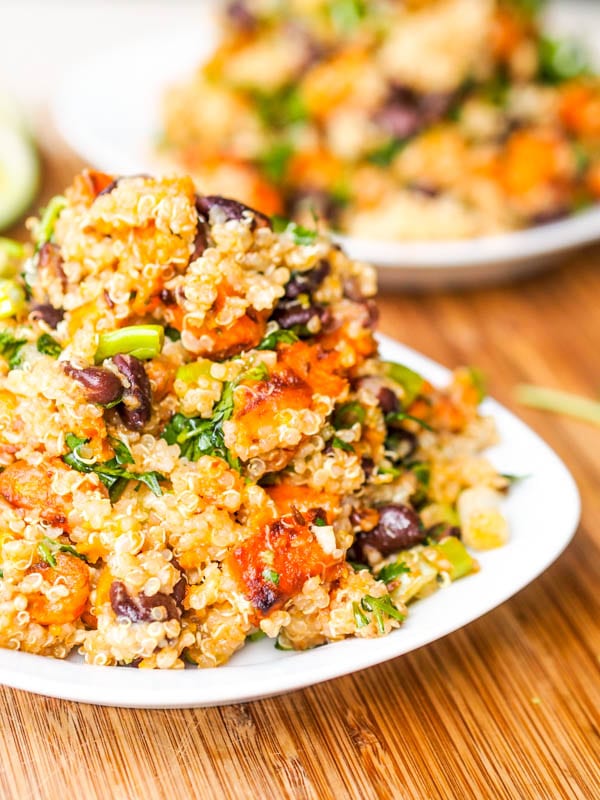 Drizzle with a lime based dressing for an extra pop in flavor.

We talked about my love of lime zest recently, remember? Well this recipe is heavy on the lime zest — a full two limes zested here – and you’ll love the freshness that it brings to a dish.

This vegan sweet potato quinoa salad is perfect for lunch or dinner any day of the year!

So happy Cinco de Mayo and I hope you have had a great weekend enjoying some nice weather! 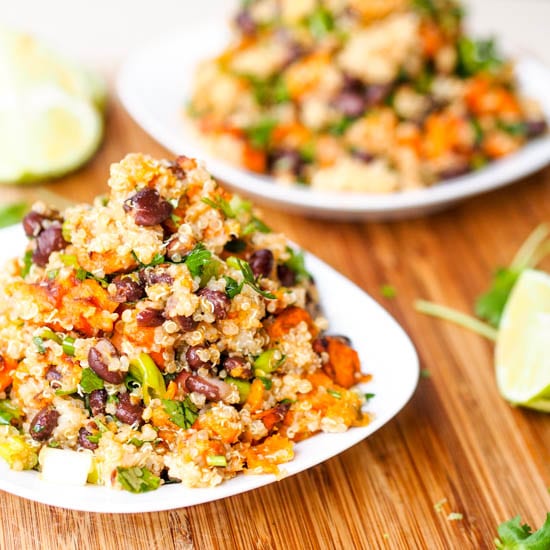 If you have any amazing gluten free and vegan sweet potato recipes of your own, do share them with us!

This salad would make for a perfect summer full meal when paired with my Vegan Avocado Gazpacho. And then you could treat yourself to my Boozy Peach Lime Italian Ice with Tipsy Cherries. Looking for a similar quinoa salad – check out my Quinoa Corn Black Bean Salad with Cilantro and Lime.

How to make my vegan sweet potato quinoa salad: 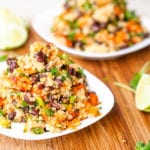 A vibrant, healthy and nutritious rainbow colored vegan sweet potato quinoa salad with black beans is perfect to celebrate Cinco de Mayo or just about any day of the year. Filled with fresh herbs and a zesty lime based dressing. Gluten-Free too.