Crispy on the outside, yet soft and nice on the inside – this potato rosti served with a flavorful mushroom rösti sauce is the perfect snack to brighten up your afternoon. 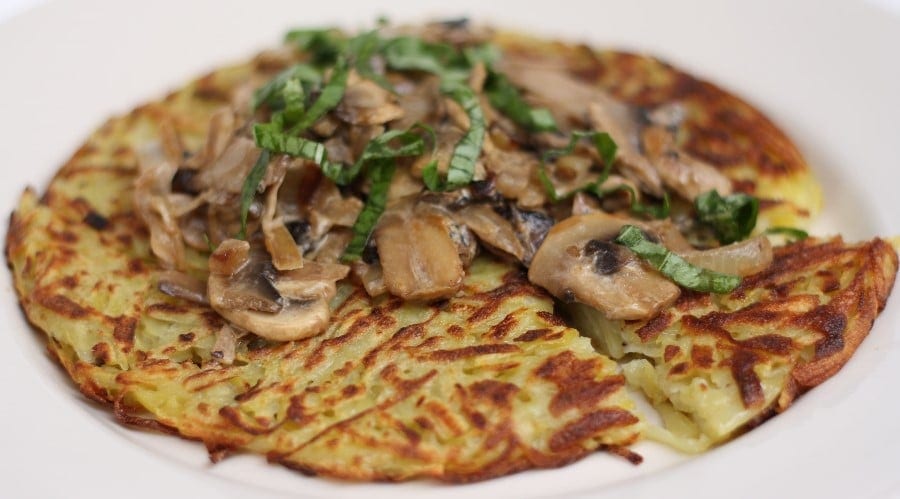 I know it’s Valentine’s Day and therefore I probably should be posting a rich super decadent dessert recipe, but since it’s also the Daring Cooks posting date, that’s going to come first. I suppose I could post both recipes today – but I don’t think I’m at that stage yet (nor do I care for desserts so I’d definitely rather have this potato rosti than cake any day).

The mandatory component was to pan or shallow fry a patty and considering my love for potatoes there was no doubt that I was going to make  potato rosti – essentially a large potato pancake, originating from Switzerland.

Crispy on the outside yet nice and soft on the inside, this makes for the perfect mid-afternoon snack. To add more flavor to it I made a mushroom rösti sauce — essentially just sauteed mushrooms and onions in butter and with few dollops of sour cream to complete this potato rosti dish.

I wonder if every country and culture has their own version of potato rosti. In my Russian background, my grandmother would make something quite similar to potato rosti – but we called the draniki, and they also were made with pan frying grated potatoes mixed with other ingredients.

I am curious to hear if other cultures also have their own version of potato rosti. Spain of course has the tortilla espanola but that’s a bit different! 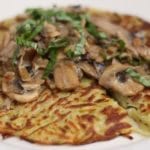