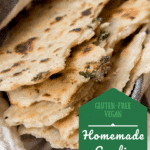 Garlic Naan recipe is the perfect 4 ingredient Indian flatbread to eat with any of your Indian curry dishes, or really any dish that has a thick and fragrant sauce! Vegan and gluten free recipe. 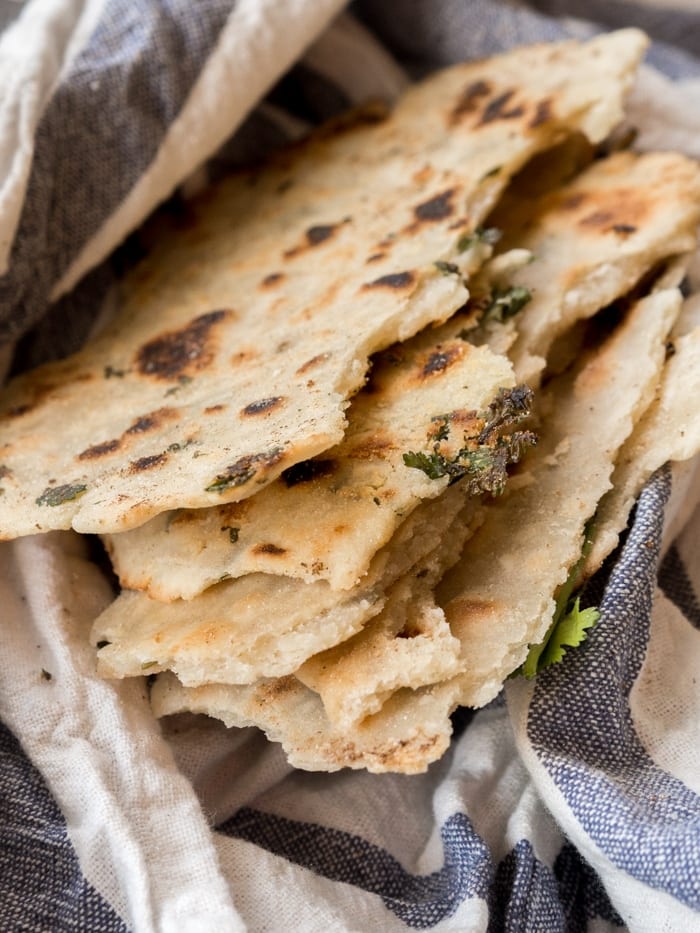 Garlic naan is quite simply the best flatbread out there.

I’ve loved Indian food for years, but I’ve always ordered the same three things, chicken tikka masala, samosas, and garlic naan. I didn’t really venture out into the world of Indian food until our trip to India in November.

And let me tell you this – I’ve been missing out.

Indian food is so incredible and flavorful that I should have been ordering a different dish every time, just to at least sample everything on the menu at some point.

While I tried tons of different dishes in India, one of my favorites is still the classic Indian flatbread – garlic naan.

The best one I’ve ever had was at the Spice Paradise cooking class in Jodhpur where we made our own garlic naan recipe from scratch. Yep, not only did I get to eat tons of it but I even learned the family’s garlic naan recipe which is how they prepare the garlic naan every single day! 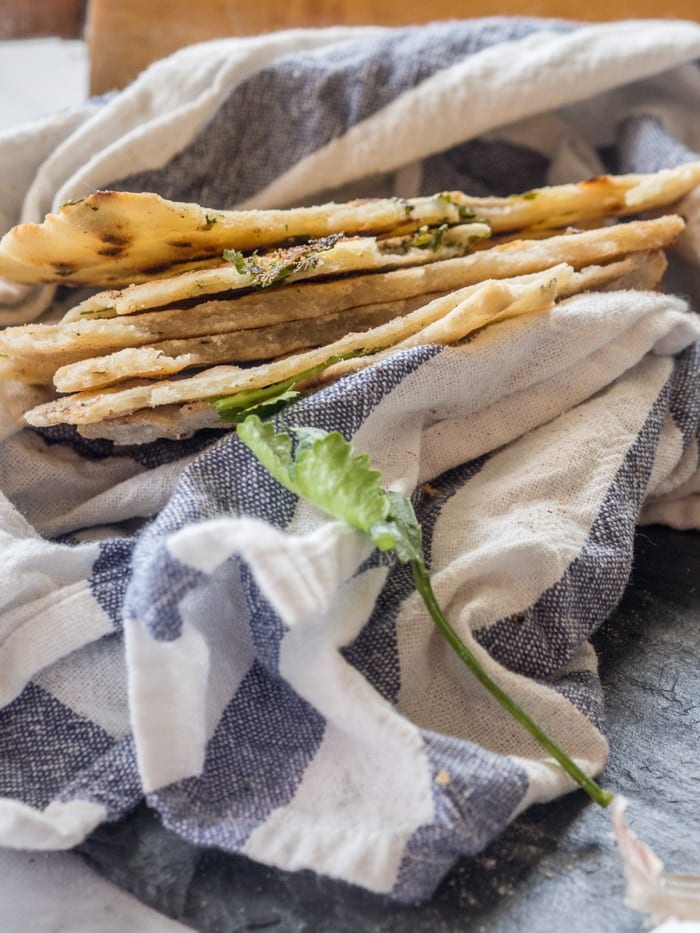 I have no idea what made this garlic naan recipe different from all the rest but it was incredible. So buttery and the dough so flaky with that punch of garlic and the heat coming off your fingertips. There simply is no other flatbread that even comes close. For me this is the flatbread of my dreams, that I could literally eat every single day and never get bored or tired of it. I mean I really feel that strongly!

I seriously needed nothing to accompany this garlic naan, I was perfectly happy to eat it on its own. We did though make a bunch of curries so I was able to dip this everywhere.

Have you tried making a garlic naan recipe before? It’s actually not that complicated at all. It only requires a couple ingredients namely:

That’s it. Only four key ingredients for this magical flatbread!

In the class we used regular white flour and regular yogurt but I now make this garlic naan both vegan and gluten free.

How to make garlic naan vegan and gluten free:

If you are not vegan or gluten free you can use this same exact recipe with regular all purpose flour, a thick Greek yogurt and ghee.

What to serve with this garlic naan:

The garlic naan is the best when dipped into a super rich and fragrant sauce, whether this be a curry, stew, or thick creamy soup.  I personally never even need rice with my dish if there’s garlic naan around – the naan is perfect for soaking up a thick sauce.

Why this garlic naan is the best:

How to make my garlic naan recipe 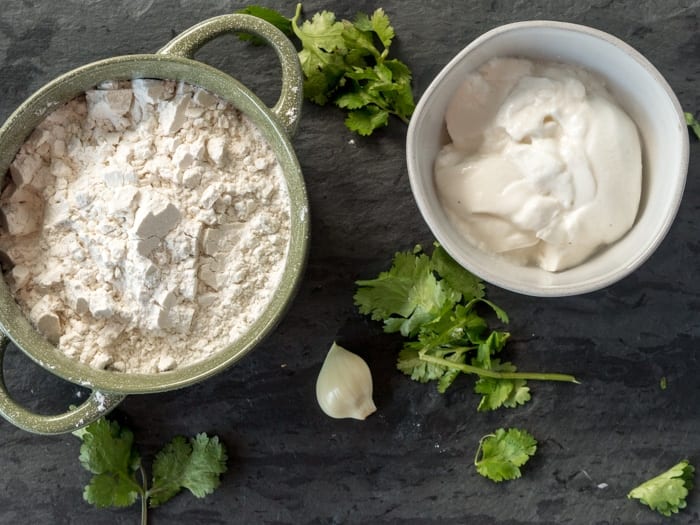 You will want to combine the flour, yogurt, cilantro and minced garlic in a large bowl.

You’ll then mix everything together until it forms a round dough ball. If you need to add more yogurt feel free to do so. Depending on the yogurt you are using you may need to add more to get the dough to “stick” together.

You’ll want to let the dough rest for 15-20 minutes. At this point I also used about 1 tablespoon of melted vegan butter to rub around the dough balls, just to give it a bit more moisture. 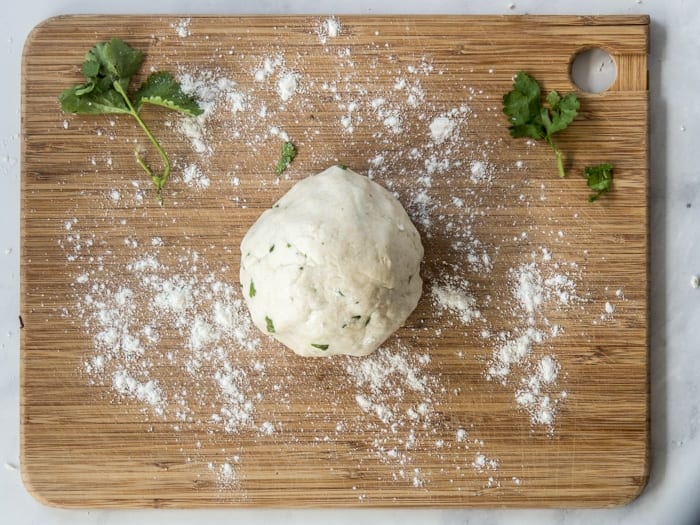 You’ll then divide the dough into 4-6 sections, roll each into a smaller ball and roll out using a rolling pin. Do not roll it out too thin – each garlic naan should be three to four inches wide. 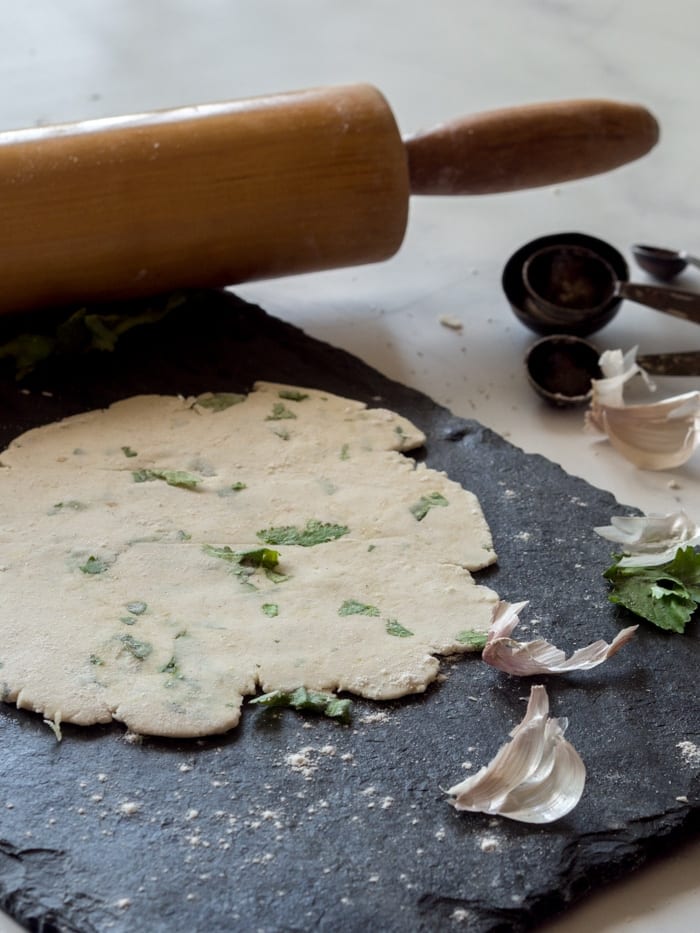 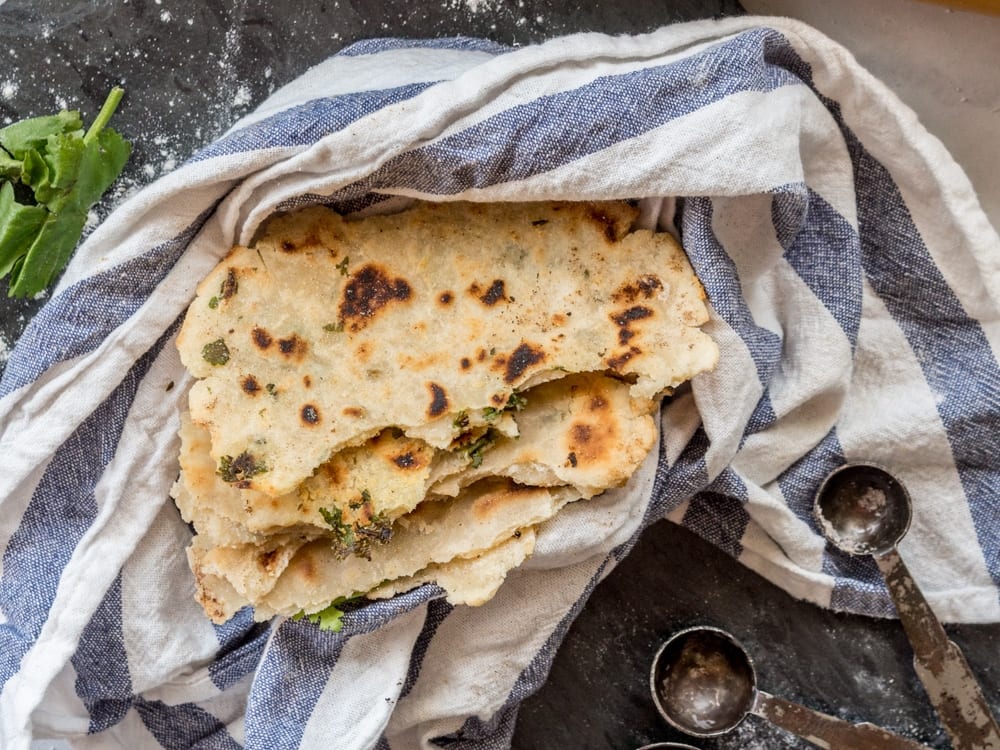 My ultimate comfort food is this garlic naan right here. Especially when it’s packed full of garlic and served hot – ooooh I just won’t be able to control myself! Carb overload for me any time naan is on the table. And now I’m happy to know I don’t have to go out to an Indian restaurant in order to eat garlic naan — I now know the secret to making it at home!

If you are not vegan or gluten free you can make this recipe with regular all purpose flour, Greek style yogurt and ghee (clarified butter)