After a month in Myanmar we’re back in Thailand for a few weeks. I wouldn’t say Myanmar flew by – it went at a medium pace. We liked it, didn’t love it. Unfortunately, the two cooking classes that Vicky had scheduled in Myanmar fell through and we won’t be able to bring you any authentic Burmese recipes. No worries though, Thai food is better and there’s plenty more recipes to showcase.

February was a short month without a lot of promotion on our end since internet was hit or miss while in Myanmar. Still, we felt we had a reasonable month and have already seen a strong uptick in the beginning of March now that we’re back in action and submitting posts again to Foodgawker, etc. 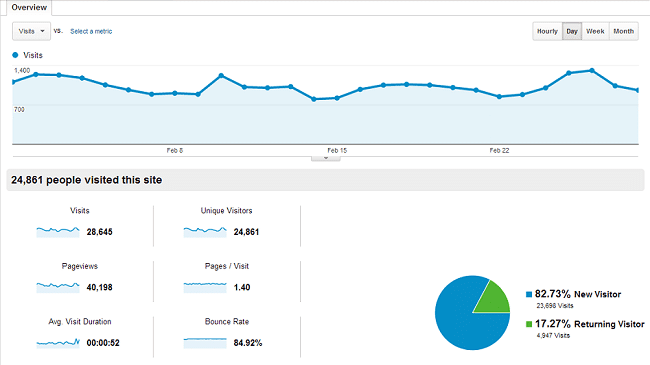 I don’t have an awful lot of updates since this month we were pretty hands-off. We’re still working on bringing our new website TravelingThroughFood off the ground but that’s really months away, especially at our snail pace (it’s tough when you’re traveling constantly).

One thing I’m determined to work on this month is testing some new Google Adsense positions. Since August when we installed Google Adsense we’ve pretty much kept the same layout without any changes. This has been three vertical skyscraper image ads (160 x 600) all next to each other on the sidebar.  It’s been bringing in similar revenue month to month and is pretty consistent with traffic. Still, there’s no way our current setup is efficient, for the following reasons:

It’s important to test different things, even if it means sacrificing a few bucks here or there, to see what works for your blog. Google has a lot of tools, like custom channels, that can be used to test ads against each other. I’m going to be experimenting with sticking ads in various places and will bring you the results in the next income update (probably, in addition, to a drop in GA revenue – but hopefully it will be worth it in the long run).

If you have any questions, write them in the comments!