Currently we’re in Laos and Vicky is at a cooking class. I figured I’d try to make myself equally as useful by writing our March income post before she gets back.  Let’s dive in, shall we?

March was AvocadoPesto’s best traffic month ever, beating August by a hair. A large part of this was FoodGawker traffic as Vicky had several posts accepted, which brought thousands of additional page views to the blog.

Another factor has been Pinterest. We’ve noticed on Pinch Of Yum’s traffic reports, Pinterest is  their number one referrer, and that relative to the size of their following it produces a lot more traffic than it does for us. This seemed like an opportunity. Vicky started in March by catching up on some old pinning, and perhaps just from that Pinterest moved up to the number two referrer (previously number three) in March. In April, Vicky is being even more proactive and has started to directly email contributors to various collaborative boards to see if she can be made a contributor. She’s already been invited to a half dozen or so new ones so this might prove to be a worthwhile strategy. We’ll just have to wait until April to see how the Pinterest traffic develops as a result. 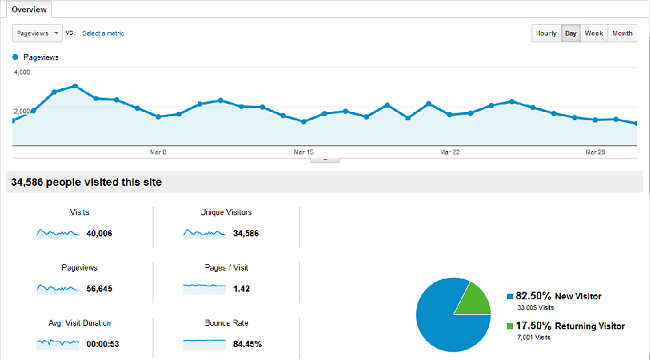 There were a few new developments in March. The first is that AvocadoPesto was approved for BuySellAds. This requires 50k pageviews a month, and back in August when we applied we were rejected. I just recently applied again and it was approved – yay! Now on our sidebar, you can see there is a vertical slot for buy sell ads (grey box that says “ad here” in the bottom right). If you click on it you will see that we are selling that space for $40. At first I had it at $80 and there were no bites. I recently lowered the price to see if we could just get a sale, so I could see how things work.

Secondly, we introduced Amazon Affiliates into the blog. We’ve had the account for quite awhile but haven’t done anything with it. We had two ideas for smoothly introducing it into the blog. The first is the shop page that you can now find on the navigation menu, which showcases some of Vicky’s favorite kitchen tools. It’s a small page now that we will try to expand to include various spices, etc that Vicky recommends from traveling and cooking abroad.

The next implementation of Amazon affiliates was to include it in actual posts. We didn’t know whether or not this was a worthwhile venture, so we took a look at some of Vicky’s top traffic posts and included the affiliate links in there. We call it out at the end, for example, in Vicky’s Raw Vegan Collard Wraps post, she mentions the knife she would use. Naturally, this has only provided a trickle of income for us but it is something that we could possibly expand upon in the future and it’s nice to diversify a bit.

Lastly, last month I said I wanted to try testing some new Google Adsense positions. Previously we have always been using the three vertical skyscraper models on our sidebar. This seemed wildly inefficient because it’s the same ad type three times, and they often display the same advertisement.

I was fooling around with some of Google’s tools, like custom channels, that can be used to test ads against each other and creating new ad types. There aren’t a ton of options that I felt would be superior if we didn’t want to stick an ad right at the top of the page or in the middle of the content. We settled on a large square advertisement at the bottom of the page, right above the comments as something that wasn’t too intrusive but at the same time meaty enough to possibly work.

The surprising thing was that the ad seems to get about as many clicks as the others, it’s just the cost per click (CPC) is not as high. Just as I was thinking maybe a similar ad in the same place would be better, Google adsense made a suggestion (a new feature, perhaps?) that I replace this 336×280 with a 300×250 (actually a smaller ad) and that that would increase earnings by 45%. I’m assuming that ad has a higher cost per click.

Guess I’ll let that run for a few weeks and check again!

If you have any questions, write them in the comments!