A super simple side dish that is ready within 15 minutes – vegan creamy corn gratin made with Sriracha, lemon juice, crunchy breadcrumbs, cheesey nutritional yeast and sprinkled with fresh cilantro. Gluten Free too! This is one of the easiest and yummiest vegan corn recipes you could whip up. 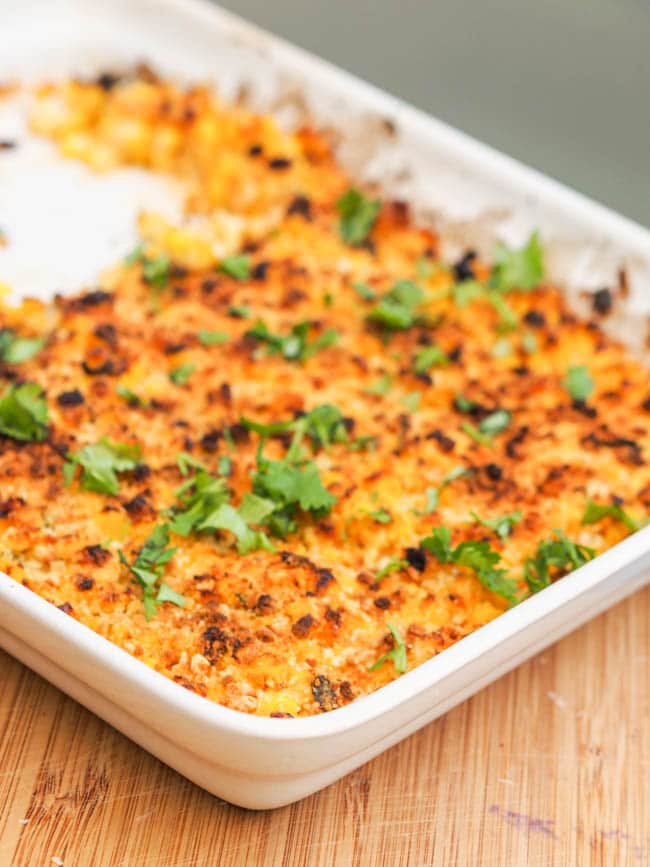 I very rarely make corn. Not really sure why. It’s not that I don’t like it. And I’m always adding baby corn to all my Asian inspired stir fry dishes.

Remember that scene from the movie Big? The one where he nibbles on baby corn as if it’s regular corn on the cob?

Ah, cracks me up every time.

Baby corn is awesome, and even more fun to eat if you pretend as if you have to eat it just like Tom Hanks in Big.

Regular corn is fun too though.

Except for when it gets stuck in your teeth. Does this happen to everyone or just me? Is that dependent on the gaps between your teeth or what? Some people seem to never get food stuck in there, others, all the time (I won’t name any names, you know who you are).

One way to avoid an embarrassing corn eating experience in public? Ya gotta cut the corn off the cob. Easier to do when the corn is cooked.

Just slice it right off, it comes nicely off with a quick down movement of the knife.

Much easier to eat that way, and you’d need to do that to make some amazing vegan corn recipes like this one.

And when you come up with an awesome vegan creamy cheese gratin dish to prepare with it, all the guests will be pleased with the flavors and the fact that they don’t all need toothpicks handed out shortly after eating. 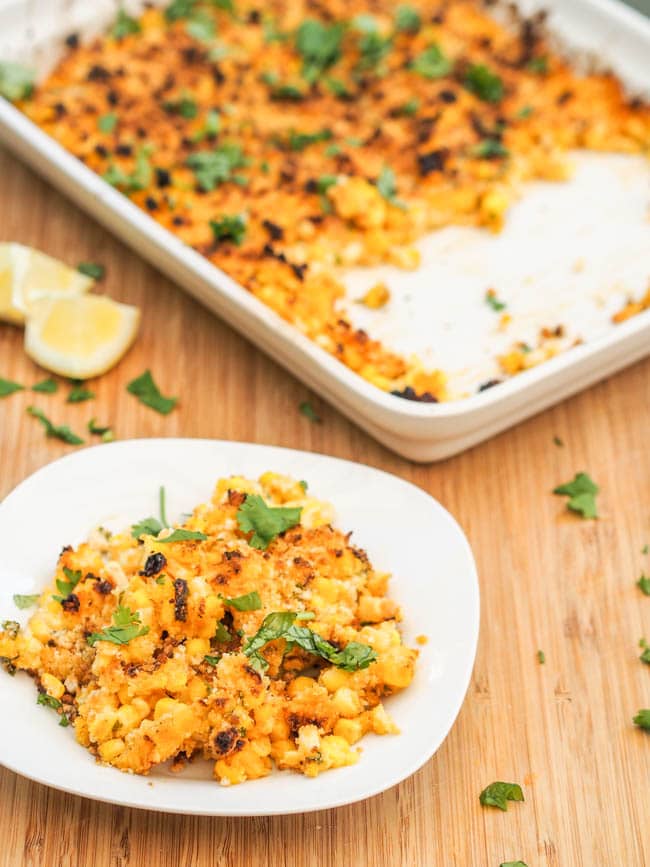 I’ve made this dish a few times now and finally recently got around to photographing it. Some dishes somehow always end up being prepared by nightfall – with nothing left to take a picture of in the morning – aka this dish right here.

You do need to have cooked corn to make this, but still it’s one of the easiest and fastest vegan corn recipes you could make. After that it is literally ready in 15 minutes. No joke.

In a small bowl whisk together the vegan mayo, Sriracha, lemon juice, salt and cilantro. Cut the corn off the cob. Mix the two in a baking dish. Sprinkle with nutritional yeast for that extra cheesey flavor and then with breadcrumbs for a nice crispy crunch.

Broil on the top shelf for 5-10 minutes – this goes to crispy and charred real quick so keep an eye on things and that’s it!

A delicious vegan and gluten-free cheesey and crunchy side dish with a creamy sauce is ready to be devoured. Seriously one of the easiest vegan corn recipes to make when you’re craving some corn.

Bet you’ll want two helpings of this one! 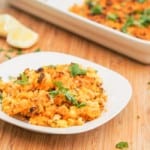