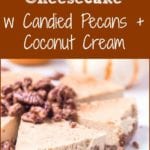 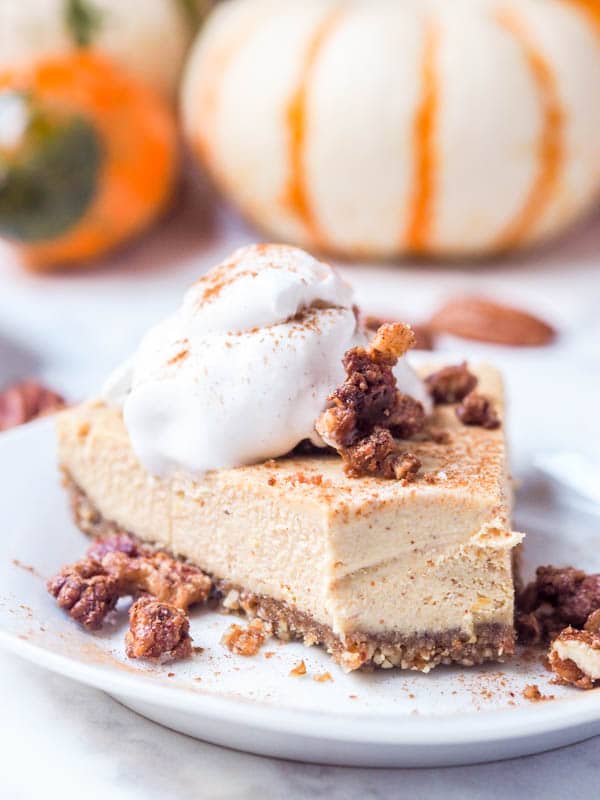 Vegan pumpkin cheesecake was what I made for a special someone in my life who had a birthday recently. D – my boyfriend. And so I had to do what I do best – prepare all sorts of delicious edible treats. And since it was mid October not just any cake would do.

I’ve been making cheesecakes for years and I feel like it’s a bit of a high pressure dessert. First off the ingredients are pretty pricey and once you mix everything together and place it in the oven you kind of just hold your breath for the next 12 hours, until you can finally have a bite of the finished thing.

I was always worried I would screw something up – overbeating the cream cheese, over or underbaking it etc.

No such worries with a no bake vegan cheesecake.

The only tricky bit to this vegan pumpkin cheesecake made with cashews is getting those cashews super smooth. I know a solid Vitamix blender will do the trick but I have yet to invest in one of those, so I always rely on my handy Kitchen Aid food processor.

The food processor definitely works, though I doubt you can get a flawlessly smooth mix – I mean maybe if you keep it running for a solid 30 minutes, but my ears just couldn’t tolerate that level of noise pollution.

Anyone else find a food processor to be frighteningly loud? And hair dryers too. When will these devices come with volume remotes? I could seriously use one of those.

Or I need to start hiding the food processor in the basement any time I’m making a vegan cashew cheese mixture.  Unfortunately for my hearing, this has been happening quite frequently, as in the last few weeks I’ve made vegan butternut squash gratin with rosemary cashew cream, vegan ricotta stuffed zucchini ravioli, and vegan zucchini rolls with herbed cashew ricotta, all of which require the food processor to be whirring about quite loudly for a while.

I’ve gotten distracted. Back to this vegan pumpkin cheesecake. 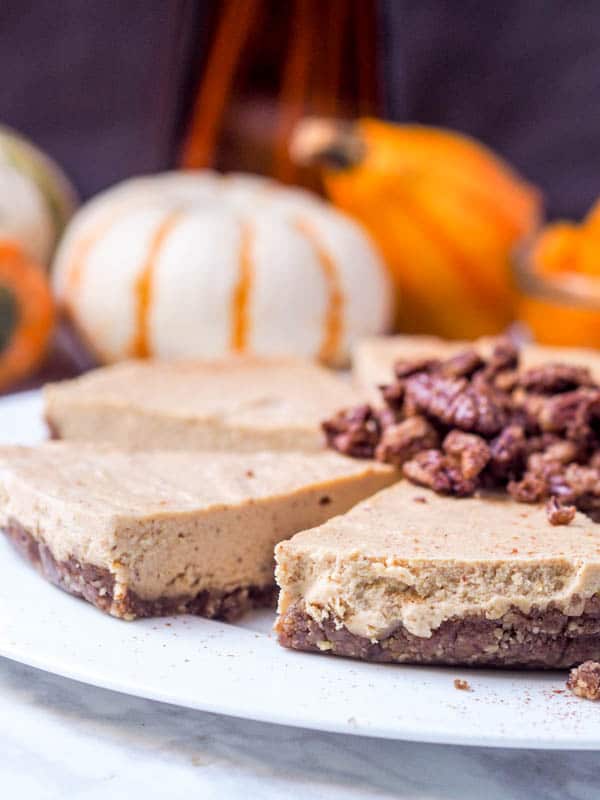 This is the quintessential fall dessert. We’re embracing that soft and sweet creamy pumpkin flavor, with a hint of maple as well as a crunchy and nutty candied pecan. Once you grab a forkful of both, and topped off with a spoonful of vegan coconut whipped cream you’re instantly in foodie heaven.

And a healthy foodie heaven, since this cheesecake is packed full of dried fruits, nuts and veggies (thanks pumpkin) you don’t even have to feel too bad about this one.

This vegan pumpkin cheesecake is a perfect fall dessert and if you ask me the right birthday cake for anyone with an October birthday. 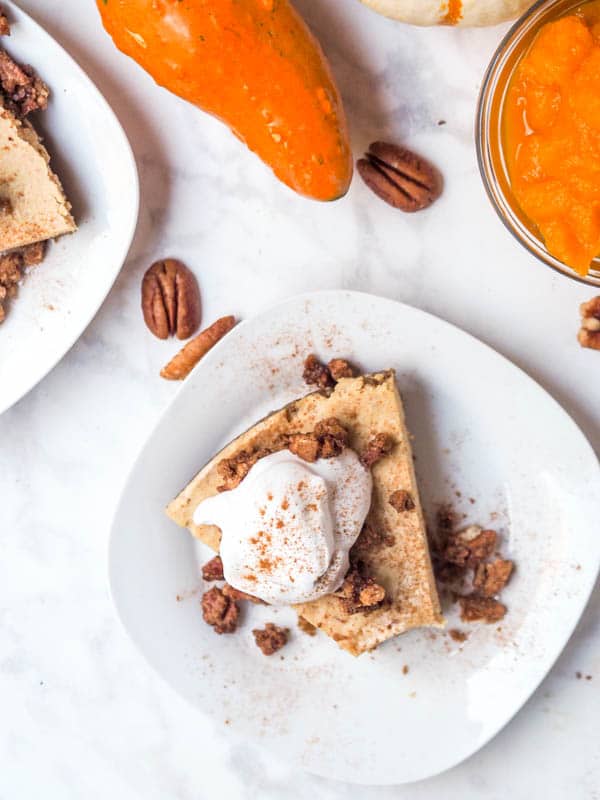 Even better when it’s eaten on a crisp and slightly cool fall New England day while watching the leaves gently glide off the trees.

**My one recommendation for this recipe is to use a high powered blender – like a Vitamix, or a solid food processor in order to get the cashew mix as close to smooth as possible. If the cashews are not completely broken down the texture of the cheesecake will be grainy which spoils the taste quite a bit. 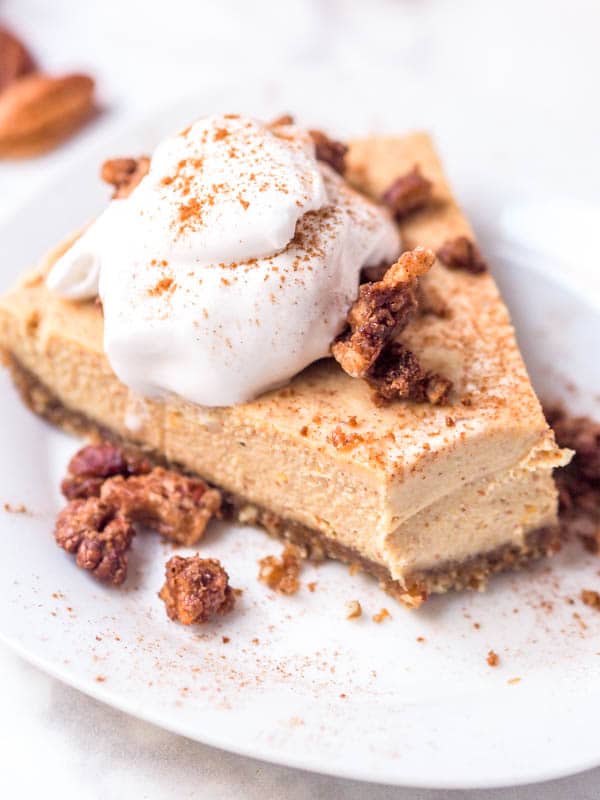 Other cake recipes that you should definitely check out are:

How to make vegan pumpkin cheesecake 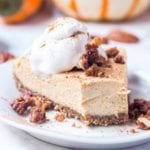 **Make sure to use a high powered blender or food processor so that the cashews are super smooth (otherwise the cheesecake will be grainy** I love my whipped coconut cream plain, but you could add a teaspoon of vanilla extract and 1 tablespoon of maple syrup when beating to make it sweeter. Nutrition Facts Amount Per Serving Calories 566 % Daily Value* Total Fat 41.1g 63% Saturated Fat 20.3g 101% Cholesterol 0g 0% Sodium 19.2mg 1% Total Carbohydrate 50.2g 17% Dietary Fiber 5.7g 23% Sugars 35.2g Protein 8.8g 18% Vitamin A 9% Vitamin C 7% Calcium 9% Iron 20%